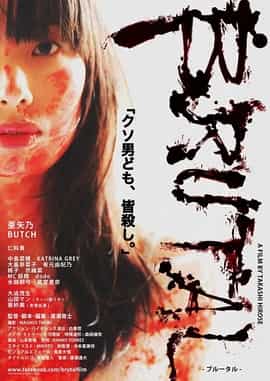 Plot – Spoilers:
Divided into three chapters, Brutal follows two lonely killers, Man and Woman, who hope to find someone that’ll fulfill their desperate need to be understood and wanted for who they believe they are. Running in parallel to their search is another regular couple who think they know each other perfectly and have companionship all figured out.

If you can suffer through the barren wasteland of the “storyline,” the reveal (aka the disrobing of both) is kind of humorous and provides some indication as to motive. Otherwise, the acting is poor (there is also just something about the male character’s fat face which makes him look like a giant baby, not a killer), the physical struggles and murder scenes are truly laughable, the gore is quite amateur, and there isn’t much redeeming about this flick. 2/5.

Thanks as always for the new films, admins. A fitting addition:)

I had actually viewed this a while back on Tubi and didn’t realize it till I started it, but watched it again anyway. Was actually recently trying to remember which film I saw the homeless guy holding the ‘hell’ sign in, bc something irl reminded me of it. I noticed the X was already on his sign in the 1st chapter that Woman had put there during the 2nd chapter, but didn’t really see why or a reason for it.

Overall this film had a lot going for it, imo. Although low budget, obv, I feel like they did a good job with the gore and overall sfx. Very violent and angry film, definitely lives up to its name in that regard. I suppose the combined extreme misogyny and misandry shown make them cancel each other out? Fitting soundtrack too, I felt it added to the film nicely. Laughed when Man was hitting the bag o bones with the tiny hammer, seemed effective.

If they just had more of a script, or fleshed out a few more of the characters, as they did with Ryuhei dude from the bar(can identify w what he said), it would’ve been quite a bit more engaging. Had a couple dull spots for sure, due in part to this. The spliced in scenes of the teens discussing love was lost on me as well, perhaps showing the opposite happening w age I suppose, or just a simple compare/contrast maybe. The ‘grindhouse’ style grainy post filter they used became excessive too I felt like. I’m obviously not saying go full on Tarantino and use actual film and different kinds of reels to achieve this(death proof), but in this it almost became distractive. Whatever. Neat ending, them folks could sure take a beatin.

Solid 7/10, imo. I look forward to seeing what this director makes in the future, as I felt this film had quite a bit of potential. Peace;)

2nd most romantic ending i’ve ever seen, right after Hannibal the show.

Sweet. Reenacted guro manga like. Ending teared me up, no joke.

A film about gender with knives, lol …. not a bad little film. Low budget but done well. The ending did remind me of the ending of Bloodshock, and then saw this film was recommended if you like Brutal. There are obvious similarities between the two.

i commit toaster bath
please be my friend on fuckbook
you find me easy lmao (the fat lesbian)
im an ugly stupid bitch too ;D

bruh fuckin gold, loved every minute of it

This movie makes so little sense i can’t even find any words for it. All i can say it looks more like the 90’s movie rather than 2017, effects suck ass.