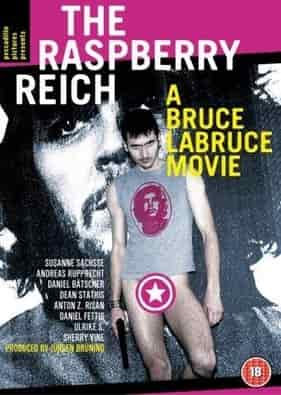 Plot – Spoilers:
The Raspberry Reich revolves around an amateur German terrorist group led by Gudrun who’s modeled her group on the ’70s Red Army Faction (Baader-Meinhof Gang). She attempts to imitate her heroes by kidnapping the son of a wealthy industrialist and hopes to negotiate leftist demands from the Dad. When Gudrun’s not spouting leftist verses (including during a hilariously brilliant fuck session), she’s trying to convince her all-male gang to abandon their heterosexuality, which she believes is the result of mass delusion.

There are multiple versions of The Raspberry Reich. The one here is the uncensored hardcore version containing explicit sex scenes and the scene where the character Che masturbates in front of a wall-size image of Che Guevara.

if you want to inject propaganda, might as well have sex while doing so. one of the best ways to captivate a wider audience in my opinion… lol

Haven’t seen this yet. Not sure how it will be

Hate to join a mob pouncing on one dude. But the truth is that I can’t stand that “I haven’t seen it” or “I haven’t bought it” shit either. But even moreso I really, really fucking hate it when you have some sort of an issue going on in your life and you go to a forum looking for some answers but all you see are replies that read “I have the same problem!”. It’s like ” Thanks for the empathy.”. But what good did it do? Where’s the solid, pragmatic advise? At least dude here isn’t doing that!

fags should be wiped off the earth!

Terrible, lame, stupid, pro-fag nonsense! Only retarded queers would like this dribble! ONE bitch in the whole film and she had to be a flatchested and fuggly dicknose joo! What a waste of film!

Haven’t watched this movie yet. I’m about to

Just cant wait to watch it , i just downloaded it