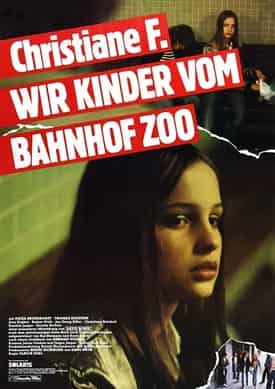 Plot – Spoilers:
Based on a true story, 13 year-old Christiane lives with her mother and younger sister in a Berlin apartment that depresses her. Though her parents are separated, she shares a fairly decent relationship with her mother and opts to stay with her rather than with Dad, even when her sister moves in with him.

A friend takes Christiane one night to a newly opened happening club. Here she meets Detlev who is kind to her when she’s handling a trip like an embarrassing noob. The two then begin hanging out together and briefly break up when Detlev starts doing heroin. But by now, Christiane is in love with him and in an attempt to connect with him on the same plane, she tries heroin. From here, her spiral takes her to Zoo Station, a railway station where junkies and teen boys and girls hang out to prostitute themselves to anyone who’ll have them.

Favorite Scenes:
Christiane, Detlev and friends whiling the night away to Bowie’s Heroes. As dawn breaks, Christiane looks on innocently at the adult world as it prepares for a new day of work and routines that seem so cut off from the happy place she’s in right now.

I have seen this film so many times, it is an excellent movie, very realistic – I should know, I have been a heroin addict myself. Great performance from the actor who plays Christiane. Thanks for posting and such an awesome site I just discovered tonight.

good movie could use better translations though.

God i love this site. Also this is such a realistic movie. I never touched heroin because i knew it would do this. I struggled with other addictions but still. Don’t let this site go down!

This movie reminds me of the song by Smashing Pumpkins – Try, Try, Try….

Powerful film, intense realistic performances. If this story is not enough to deter you away from heroin, nothing will.

this movie is heartbreaking omg

READ THE BOOK … it is MORE POWERFULL than this stupid movie . I just did it and it NOT COMPARE to this !!! TRUST ME !!! READ THE BOOK !!!

This was totally my childhood.. with fewer drugs.
I love this movie, btw— thanks for uploading it, admins 🙂

It was suppose to me be playing on TMC AND 3:15 in the morning. I saw siskel and every rave about what a powerful film it was . I’m surprised after 44 years of life I’ve never heard of this movie. It lived up to the hype

Long and boring. Who cares if junkies or alcoholics die. It’s too many people around and there is no room for garbage. Beside all they do is being a burden to society and pitty crime. Wasting of taxpayers money.

Tragic, realistic film. As a recovering addict with over 22 years clean, where there is breath there is always hope for recovery,

Jeez. this seems like a meeting place for current or former drug addicts.
Good movie.

Is heroin that good? Dam I’ll stick to the kush tho

It shows how important are the people you surround yourself with, in shaping your views and character. If you hang out with a bunch of fucking junkies, you are gonna end like them too at some point, just to “fit” in. And how people are easily influenceable by their “friends” (especially women)

The moment a person start taking and getting addicted to drugs, they lose their humanity and should be treated as human garbage. Why the fuck should i treat them with “respect”, when they don’t even respect themselfs?

Losing their morality, start being a danger to society, their families and to themselfs. And a lot of them acts, like because they do drugs, they are “mature” or know shit about life lmao there’s nothing mature about taking drugs. Is pathetic and low life.

Anyway, great movie. To the next one.

we can be zeroes just for a day