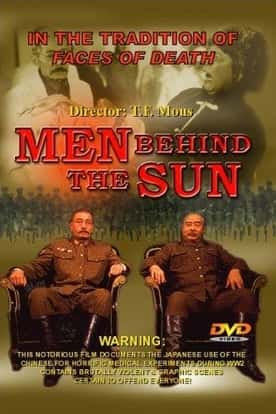 The subs are a bit off here and there – was already burnt into the video, so nothing could be done

Plot – Spoilers:
Men Behind the Sun is based on Unit 731, a facility run by the Japanese during WW2, where experiments were conducted on mostly Chinese and some Soviet prisoners. The prisoners were referred to as ‘logs’ and the experiments were part of a grand plan to design biological weapons.

Lt. Gen. Ishii arrives at Unit 731 with a reputation that forces even the Generals there to be servile, with his every whim unquestioned. Coinciding with his arrival, a squadron of teenage boys are brought in, who act as a sort of mirror to the atrocities that the perpetrators rarely stare into. With defeat for Imperial Japan looming, Ishii believes his Unit is a secret ace that can turn the war around and the experiments get more brutal.

Apart from the quite vivid human torment, Men Behind the Sun also includes a few controversial scenes of violence vs animals such as a cat being devoured by rats (later claimed by the Director to be fake), and an (oddly) aesthetic scene of rats on fire scurrying hither thither.

Predictably, the movie was received with outrage and was promptly banned in a number of countries though most of this probably had to do with its historical context. 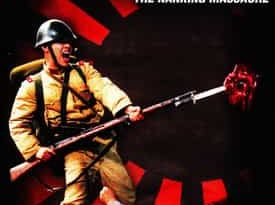 ummm may you fix the loading? My internet is running good, but it still buffering like everytime.

Get a better internet service. Movie ran without issues on my side.

Its no secret that the Japs were one of the cruellest regimes during WW2 and other conflicts as this film points out. Seeing as this is based on fact rather than fiction puts a whole new perspective on things. I think this film is quite accurate as to the atrocities the Japs perpetrated, and its no wonder they were nuked twice in 1945. Not an enjoyable movie but one that is necessary to bring out the truth of war.

And all the staff working at Unit 731 was pardoned by the US, not a single prosecution. Dr Ishii led a nice, peaceful life to the respectable age of 80+. All their “research”, reports, …, was transferred to the Pentagon and the likes. Now what does this tell you about the “truth of war”?

I remember watching this movie with English dub on Youtube and it’s like a dark comedy oml.

If you watched this on You Tube then you saw the censored version and missed out on a lot of the film. You Tube is notorious for censoring most of the films they show as they are bound by some code or another to be family friendly with their content.

They didnt censor Serbian Film when i watched it on YT. Wish they did lol

I doubt you saw the whole 104 min version on YT. They censor films with even the mildest violence. They certainly would not show the baby scene in full or anything related to pedophilia. If it was posted by someone, it will soon be removed if it has not been already.

Sprski Film’s screener has been on YT for years, as has the full uncut version of MBtS. You’d be surprised by what YT allows if it’s not monetized & hidden behind a content warning!

Nobody likes a no-it-all. I happened to have seen it too. The full, uncut version on YT. Now STFU, asshole.

if it was a couple of years ago, even, those things could slip through the cracks pretty easily for a while before being taken down. i catch movies even now before they’re copyright struck and lbr a lot of indie and horror movies don’t have the company/manpower behind it to get taken down asap esp in 2018 or earlier yt era.

this is one of those films that was considered terrible for its time, but this movie should really be on Amazon Prime or Shudder at this point. its more of a historical film and its done really well! personally loved watching it. snuggle up and pack a bowl for this wild ride

Think the animal scenes alone would cause outrage in todays climate.

I poop on your face
Reply to  RawDeal

Yeah it would. Today’s western society care more about a dog than they do about a child. This is one reason why society is going to hell and because of millennials.

Aside from the animal cruelty in this film, the biggest thing that really pisses me off is the fact that some of these sick fucks never stepped into a courtroom to face justice for war crimes but were given immunity and sanctuary in the U.S. just like the Nazis before them. Makes me sick really. Honestly, I wouldn’t be surprised if Saddam Hussein and Osama Bin Laden are having drinks together and exchanging war crimes stories in some deep underground military base in the U.S.

Different movies about the same thing.
https://www.effedupmovies.com/philosophy-of-a-knife-1-2008
is more from the pov of Russian victims

The message of this film is no matter what you do to Asians, there is still billion of them around.