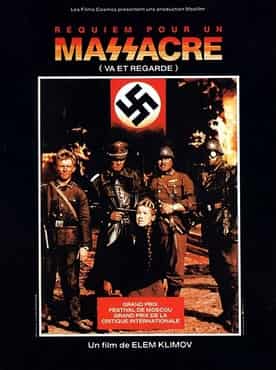 Plot – Spoilers:
A couple of Belarusian kids hope to join the Resistance during the Nazi occupation of WW2. But for this they need guns. They find one buried in the sand and the next day one of them, Gaishun is recruited by the Resistance. Gaishun is thrilled at the prospect of taking on the Nazis and spends the day with a beaming smile that is in contrast to the jaded, weary faces of his older comrades.

But before Gaishun can earn his stripes, the village is bombed and he is left to wander the desolate countryside accompanied by a young girl Glasha who had been rescued by the Resistance.

From the naive thrill of fighting for his land, Gaishun is soon battered into an unstable pulp of fear, insanity and guilt by the realities of war. Guilt because it is suggested the Nazis noticed him digging up guns and so bombed his village.

Come and See is replete with grand scenes that defy conventional depictions of fighting and war.

Favorite Scene:
The one with the cow during a bleak dusk lit up by flares and gunfire.

This movie is astonishing !!
I was so surprised when I saw it, the story is heartbreaking (obviously, it’s set in WW2 duh), the performance of the actors is really great, especially Gaishun/Florya’s !!
Sure, the pace is ,,,, heh, boring/kinda slow, but if you hang in there, there really are beautiful shots/scenes.
The end is just (wow) incredibly sad (for me), ’cause you know what happened in this movie happened irl.
But yeah, it’s a pretty good movie, recommand !! >:^]

One of the best movies ever made.

A flat-out masterpiece, harrowing and unforgettable. With both documentary-like immediacy and terrifying surrealism, you are traveling with the protagonist into the devastating heart of the atrocities in Belarus during the Second World War. There is no false triumph or glory here, just devastation and survivors who envy the dead.

It’s not what SS and nazi did to the world bothers me, but it’s who we are as human beings as we saw in recent Azerbaijan Armenian war makes me sad and leaves me heart broken. These 2 nations been part of soviet union and both suffered along with other parts of USSR during second world war. However it did not stopped them starting a war and killing each other. We are not fallen angels, we are just risen animals who look for a chance to get back to our nature.

Powerful movie, beautiful and well acted. Yes some scenes maybe artsy or drawn out, but only adds to the emotion of this film. If this doesn’t stir something in ya, you are heartless. You nazi’s watching this must be so proud. Mandatory viewing IMO.

I’m only half way through and it’s amazing. This movie should be shown in schools.

The events depicted in this film are now occurring hourly in Ukraine.

Heard that someone put a bounty on Putin. 1 million dollars apparently for anyone that will knock him off. I would ice that motherfucker for free if I had the chance. He is an oxygen thief that needs to be shot like the dog he is.

This happened to my friend Çınar

I smirk at the American mass school shootings. Shame it’s not enough.

Girls, admin are deleting our conversations.
I’ve been practicing my knife-throwing prowess, the Viking community have been generous with their blades and workmanship. How many little piggy’s can the big bad wolves devour? 🙂
One little piggy faces extinction.. We’re going to be renowned for this, the new generation of horror will commence.
Girls, fuck admin on here, we won’t do what they tell us. Too late for little piggy #1
Discord 😀

After her polarising film debut, Olga Ivanova Mironova retreated from acting altogether, even reproaching all obverses of the lurid limelight. Here’s a simpatico soupçon, in 1991 Olga founded the choir school for boys and young men of Doubna, she became its artistic director.
A venerated, precious film to me, brimming with resplendent guttural presence.