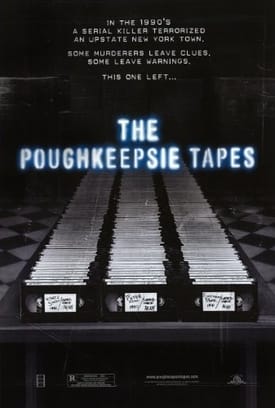 About the Two Cuts:
The Rough Cut was shown at a few screenings in 2007 but the official release is how the Director wanted the movie to be seen. This release took over 10 years due to some issues with MGM.

The two cuts have small differences wrt the editing and extra/missing footage. The Rough Cut is longer by about 7 minutes, and apart from one murder scene which is longer here, the extra runtime is mostly distributed across stuff the agents and others talk with a second or two here and there from the tapes.

Our suggestion is to watch the Official Release first, so you get an understanding of the events and then if you feel, watch the Rough Cut as the sound is bad and subs are unavailable.

Plot – Spoilers:
The Poughkeepsie Tapes is a documentary about a fictional serial killer who stalked the city of Poughkeepsie. He is the master race serial killer as he is able to turn all investigative profiling methods on their heads and confound the police for years.

Interviews with FBI agents, family members of victims and others involved with the cases are deftly intercut with snuff takes from tapes recovered at the killer’s home. These tapes run into 2400 hours of footage and contain scenes of prepping, abductions, torture and killings.

A central figure in the docu is victim Cheryl Dempsey, a college girl, and much of the movie is a leadup to understanding what became of her.

Random: There’s a little hidden scene if you sit through the credits.

Better then I thought would be. Not as shocking as I expected.

Very enjoyable film.
I liked the psychological torture element.
Reminded me of Henry: Portrait.
The B-grade actors make it work really well.
Could definitely see myself as a Master one day….

Perhaps you need psychological help …or you’re a Trump.supporter perhaps ?

A trump supporter?? Don’t be a fucking idiot!!

bruh you cant be for real

Is this movie or its scenes real ???

A favorite of mine. The brain-breaking captivity stuff is gruesome and the Andersen’s at the beginning are my favorite movie kill period.

bruh the scene with the woman in the police car has to be one of the best scenes ever made in a found-footage horror movie. truly bone-chilling.

Really boring and kind of irritating.

Yeah that scene was actually really good. It was a bit predictable but they did it well. I wasn’t super impressed by the movie. It tried really hard and it was almost good. But some parts I thought they did right.

p.s this is the best website for good freaky movies. I thank you. Sincerely,

I am not fond of this movie. I liked the idea behind it, but I don’t think it was executed very well. The acting was horrible. Everyone is so melodramatic. You only have to watch real true-crime documentaries to see that law enforcement doesn’t really act the way they do in this movie when giving an interview, The movie wasn’t disturbing. It was pure cringe. Watch Man Bites Dog if you want to watch something that is really messed up.

Man Bites Dog is one of the worst movies ever made, i.e., so bad it’s just horrible. If you want to see a really good effed up movie, then watch The Burning Moon, or Island of Death.

I kept seeing this movie mentioned in comments and on different sites so figured I would check it out. About 20 mins in I started to feel a bit psychic. 30 mins in I realized I had actually seen it before. Lol. Not sure when but obviously it didn’t stick with me long. That said, it is decent. I enjoyed the second viewing as I couldn’t remember it all. Prob won’t watch again. Nothing that amazing and as the comment above says, it’s poorly acted and just bad at times. Still worth a watch.

This is one of those movies where the acting appears to be too good. They were trying to pull off a documentary type horror film. In this case, you wouldn’t want the acting to be that good given that you are trying to give off the impression that these are real people. Other than that, good movie.

My main gripe as well. So close, but missed the mark due to being able to see the “acting” from the agents especially.

It was a good film, i enjoyed it.

Delicious. The aspects that reminded me of Erik the Phantom of the Opera were truly heart-affective. The “Master” is a delightful character, and his beloved slave only betrayed him once: she took her life instead of giving it to him. I’m sure he will find someone else, though.

It’s a good movie, but it’s way more tame than I expected