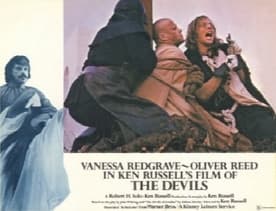 Plot – Spoilers:
The Devils is loosely based on the historical character Grandier from 17th century France.

Grandier is a Catholic priest in a time when Protestants are hated and persecuted. Though just a priest, Grandier’s power and influence on his town Loudun is cult-like. The women, especially the nuns in the town’s convent, swoon at his very mention. And the men grudgingly admire his philandering skills while respecting his preeminent position in defending the town against the nobility’s attempts to expand their influence into the town.

It’s almost like Grandier was aptly named, for such is his sexual grandeur, the mother superior of the convent Sister Jeanne tortures herself into ecstasy while dreaming about him. Eventually, Grandier falls victim to his ways when he secretly marries a virgin wannabe-nun and the nobility and his enemies congregate to wreck him.

The Cut featured here includes the controversial Rape of Christ scene that was banned from most versions of the movie.

i saw this in the theater with the cut scene included back in 1971.
thanks for posting this.

Very nice movie, I saw nothing so brutal to forbite the world to watch this.

I thought this movie was just okay. Vanessa Redgrave was fascinating as the hunchbacked sexually repressed nun. Had she been the main character it would have been a great movie. But as it is it’s mostly Oliver Reed screaming a lot. It’s worth it though just to see Redgrave’s few scenes.

The hype is better than the film. The set design and costumes are amazing.

Powerful movie, must be a shocking movie back in 1970’s when church still was worshipped.

Saw this on VHS years ago with some jumpy scenes, obviously where the censors made the cuts. Great to see it in its entirety here on EUM, there are certainly a lot of extra scenes in this version. I can imagine the fuss this film would have caused back in 1971 with its religious blasphemies. It may not have the same impact now, but its still quite shocking in its portrayal. I really enjoyed it, it wasnt low budget and a lot of thought went into making it. And it was directed by Ken Russell, one of the big directors of the 70s and 80s. Awesome film!

is this the uncut version?

This is an amazing movie; thank you for posting.

Love this movie…I love it more now that I’ve seen this version. Vanessa Redgrave plays a nun gone mad brilliantly. I did have to close my eyes during the rape of Sr. Jeanne with the internal demon cleansing devices. Father Urban Grandier was a very interesting fellow, I suggest you read about him.

Thanks for this amazing film, now this is EFFEDUP

I would advise against reading this comment prior to watching the film, but you probably already know of a great deal of the story if you are on this page.

As a trying follower of Christ, and a spiritual/human being, this movie burdens my heart. My initial interest in the picture arose purely out of the controversial element, but I found myself intrigued by the philosophical aspect. In the beginning, Father Grandier appeared to be the contemptible man, and the nuns somewhat hysterical. After all, he is portrayed as selfish, reckless, and abusing of his position. This all flips at the start of the second half when Sister Jeanne’s sexual repression begins to manifest in false accusations against him. Up until this point, despite Grandier’s iniquities, his voice sounds the most reasonable. At least he is conscious of truth, even in his own criticism. Yet, the beginning of Sister Jeanne’s trial/exorcism brings forth the big picture of the film, and the absurd religiosity and authoritarianism among the clergy of priests. In the film, this event occurs coincidentally with Grandier’s self-reflection, and his attempt to repent from his wicked ways. From here on is where the narrative descends into total chaos, madness, and delusion. At this point, I felt sorrow for what I was watching. The narrative of the Gospels was, in large part, Jesus’s calling out the self-righteousness among the authoritarian Jews whom seemingly knew nothing of love of God’s Creation. The story of the attempt to stone the prostitute was heavy on my mind during the second half of the movie. Yet, sadly, this film portrays the Christian church failing in the same way the Pharisees did, despite Christ’s teachings, which is unfortunately paralleled with overly-religious folk today. Thank God I attend a church that predicates itself on walking out the example of Christ, rather than abusing the New Testament for its own political agenda. The latter half of this film is rife with exactly that absurdity of abusing Christ’s name. Whilst Father Grandier’s portrayal in the beginning of the movie was observed with disdain, the second half exhibits him as the most sound, respectable human being within the movie. Not only does he admit to what he actually did wrong, he maintains his truth against what was being accused of him, despite intense torture. To act in the manner as these self-righteous priests and jealous nuns is to miss the point of the Gospels and teachings of Jesus Christ completely, perverting the narrative entirely. Likewise, to watch this movie with the perception that genuine lovers of Christ are as absurd and contemptible as this clergy is to take this film as propaganda, rather than what it is: a sad, poetic tale which explores a variety of relevant themes as a genuine work of art. With all this said, one must recognize that, despite such groups as the Westboro Baptist Church and the Christian types which picket outside concerts and Pride parades with “GOD hates fags” signs, there are genuine human, spiritual beings that understand the Gospels, understanding their own flaws as human beings, and do their best to walk out Christ’s example. The best we can do as people is to love, accept, and try to understand people without shoving our ideologies down their throat. Christ didn’t exist to create a religion of tyrants. He came to show us the love of God.