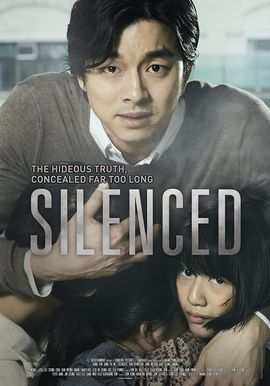 Plot – Spoilers:
The new art teacher at a Korean school for the deaf shockingly finds out that the glum faces of most of the kids, is but a meagre reflection of the horrible abuse they’ve been enduring from the staff for years. Though he’s mostly a passive person, with the help of an activist, he tries to do something about it.

Silenced is kind of similar to the Danish film Der Kommer En Dag. A real story, decades of abuse and a teacher trying to help.

The Real case:
Gwangju Inhwa School for the Deaf had a history of abuse from the sixties for five long decades, before a teacher finally managed to get a court case to happen in 2005. At least two kids were allegedly even murdered as part of the abuse in the ’60s. Due to the statutes of limitation expiring, many of the cases brought forward by the few victims that were willing to testify, were thrown out. The trials were a mess, as were the judgements. The teacher lost his job, the victims were kicked out, and some of the accused staff reinstated. Wider coverage was only given to the case after the book (The Crucible) and its film came out. Some laws were also eventually changed as part of the outcry.

Truly heartbreaking and blood boiling. It shows not only the silent suffering of the extremely vulnerable but how its deserved justice can meet the same fate when it comes up against many heinous hindrances such as corrupted authorities, high reputations, connections, bribery, and worst of all, preying on the desperation of the poor in exchange for legal immunity. Well worth the watch.

Great movie, but difficult to watch because of the subject matter.

I have the Dora Double Feature and could supply all of it to this site if you’re interested.

Bruh that’s what I call 10/10 true masterpiece, B I G respect to South Korea, most of the movies, TV shows they make stay with me for days
Thx so muchfor this gem effedupteam. Love yall

Director and actors of Squid Game. Someone spotted the talent. As in general, response to South Korean cinema came very late but it is a good thing anyway. Some top films from this country for more than 20 years…

Good movie once again showing us that PIZZAGATE IS REAL!

Actually made me cry, beautiful story. The idea of not having a happy ending is genius, if korean citizens saw the movie had a happy ending it wouldn’t invoke a need for change, they’d think that those happy endings happen in real life too. Thank god for this movie and how it changed Korean laws.