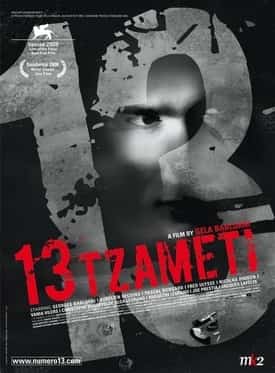 Plot – Spoilers:
Every job counts for a Georgian-French worker Sebastien whose miserable family depends on him and his hardworking, lame, elder brother. So when he gets an offer to repair the roof of a junkie, he’s as enthusiastic about it as his troubles allow him to be.

While working on the roof, he overhears the junkie vaguely talking about a high-paying opportunity that has come his way. The junkie dies shortly after and Sebastien chances upon an envelope containing a train ticket and hotel booking that point to the mystery job. When Sebastien is curtly informed that he won’t be getting paid for his work, he assumes the junkie’s identity and decides to take his chances going for the mystery job. However, on reaching the destination, he senses danger lurking of a type beyond his wildest expectations. But by then, it’s too late to turn around.

Pure dread. If that’s what you crave, 13 Tzameti is for you.

Thanks for the new movie, admins!

Art for the sake of art
OR
Why is every French film pretentious af?

So, I saw this film was just posted on here, my favorite site, so knowing nothing/ having read nothing about it, when I started it I was immensely worried & excited. Excited because I adore anything filmed in b&w, yet worried because it is French. I find most French movies very overrated n pretentious. For every excellent french epic, like City of Lost Children, there’s 10 overrated pieces of shit, like La Haine, as far as their ‘art’ films go.

Art for the sake of art is the most passé film style, yet the French just cannot get enough of it. Then sheeple scream their silver coin words like ‘avant-garde’ and ‘cinéma vérité’ when in actuality they don’t know what the fuck either are, and most often the film is neither anyway.

Same w this film. Horrible plot that could’ve been a 20min short film, if that, and predictable all the way thru. Horrendous acting, or lack thereof, w the only good actor being the junkie dude that overdosed. Seemed like most of the actors were reading off que cards, or hated their lives/ the film. OUR MAIN PROTAGONIST WAS ABOUT AS DEEP AS A PUDDLE OF WATER, TO THE POINT WHERE I WANTED HIM TO DIE. But w the predictable plot, u knew he wouldn’t die till the ol roulette was finished n he got merk’d by Mr vengeful brother. The only tenseness in this film is waiting for the credits to finally roll. The little music it had was garbage too.

The matches announcer screaming n overacting I found hilarious tho.

Good movie, but very sad. Thanks for posting.

Admin Gods have delivered once again! I watched this little gem of a movie years back pre streaming days on world movies by accident and have always wanted to rewatch it. Merci

Elliot Spencer why bother. You pbviuosly know more about movies than anybody else then go on to explain why. If thats not pretentious, well bite me! Take no notice of his review. Its a very watchable, low budget movie that delivers. Trust me the U.S. remake will be shit!

Elliot Spencer, maybe you are just burned out on French films. I think this film is definitely worth the watch and I like the music that goes with it. Thanks for uploading Admin!

This is a great film… definitely a must see if you are a fan of independent cinema and love thrillers and suspense. Indeed it’s predictable but the plot and background of the script grant enough tension throughout the film. If you’re a person who enjoy the NORTH american remakes (America is a continent …not a single country) this is not even the right website for you.

Good movie for what the subject matter involves. Nice timepasser.

Very cool and noire! I loved the music in this! Lovely little movie.