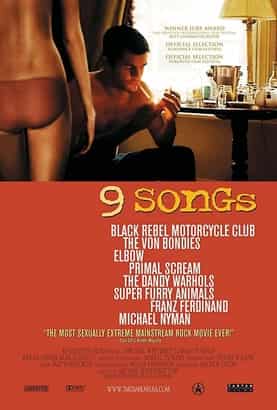 Plot – Spoilers:
An American woman in England begins a relationship with a Brit. They have a lot of sex – well, sex spread out over a year, that gradually meanders into mild bondage.

The couple indulge in realistic conversations and attend local rock shows featuring bands such as Primal Scream and Franz Ferdinand. Nine of them actually – hence the title of the film. And while there is a lot of indie style to the making, the two characters are typically urban but with nothing interesting to offer, other than the petering out of a relationship.

9 Songs was controversial at the time of its release for the unsimulated explicit scenes in a mainstream movie helmed by an acclaimed director in Winterbottom.

YESSSS!!! Thank you so much for uploading this brother!!

I don’t listen to bad reviews, I will only judge a movie once I seen it myself. Can you please upload subtitles ?

liked the film a lot, good story, simple, emotional, all I can mention

I prefer to watch a film and gain my own opinion. I will comment accordingly upon completion with a valid theorem.
Much appreciation for the ingratiatingly under-appreciated work you do Admin <3

Nothing effed up or interesting about this one, imo. Simply a snooze fest that looks and sounds like it was filmed by a high school student. 1/10

Not very interesting sorry, kinda a waste of precious time. Lets leave the story aside cause that doesn’t seem to be the main point and there s not really much to say anyhow except ‘nooot interesting’… essential?! Minimalist??! Nooo, just noooot interesting. Style? Mmm, nope. Musics, being titoled 9songs?! Oh god spare me. I’m not commenting on the “actors? acting? characters?” because i don’t wanna offend nobody.. but is it just me or she’s the most totally annoying thing ever? ….. Then philosophical question: is that (the annoyngness) better or worst then the unexistingness of him?

If the movie was realized by the couple themselves (plus another cameraman here and there) as a school project with no budget and with fortune tools and very little time i could understand why it is as it is and excuse it and find the good in it …. but that doesn’t seem to be the case. ….. And i mean, i always appreciate (i thought i did at least, before gettin bored to death by this. (Halfway through i just started practicing scales and strings jumps on my guitar) i thought i always appreciated some daringness and rawness in representing sex and nudity and maybe life etc but…no, i don’t. More then fuckdup it just came out as pretty fakedup to me ….Anyhow thanks, and also for the chance to rant (i was supposed to stop at the first line) and lose some more time in the process … : )

Is this the censored / edited version? IMDb has it as 1 hour 11 minutes but on here it is showing a runtime of 1 hour 9 minutes 36 seconds. It would appear almost 2 minutes has been removed (censored?) from this film. 🙁

Additionally, also on IMDb in the Alternate Versions section is this little tidbit of info: “Unrated Edited Version on DVD in USA removes the explicit sex, but it still too graphic for an R rating.”

Sorry but I’m not gonna watch this if it’s been censored.

This guy has a really nice looking ****.

I was getting bored till I saw the full vaginal penetration which was nice. They should have done it without the condom though.