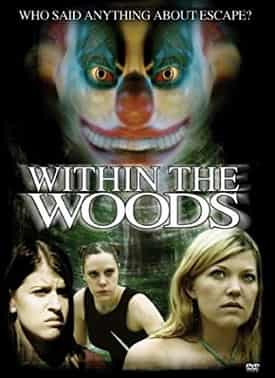 Plot – Spoilers:
Though this was the third film in the Camp Blood series, Within the Woods isn’t considered an official part of the series, whatever that means.

Other than the Clown and Camp Blood, we have new characters here. A media mogul Tony decides to stage a reality contest at the camp and signs up 5 contestants. The contest is straightforward – survive 24 hours, and the survivors get to share a 1 million dollar prize. Despite such high stakes, Tony hires a buffoon to dress up as a clown and scare the contestants and hands him charge of installing cameras that routinely fail. Expectedly, the real Clown turns up to torment the contestants.

Within the Woods is often unintentionally entertaining with big-boobed Jessica producing some of the most hilarious screams captured on camera. 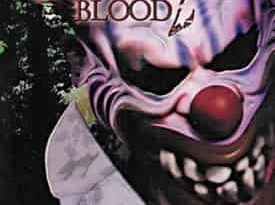 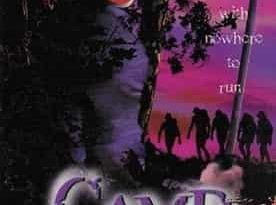 I found this entry to be very average when compared to it’s two predecessors. Average characters, average kills (except for guy falling on tree), and why tf would they title it “Within the Woods” when for some reason they’re damn near in a desert the whole time. I did find the ‘whatever it takes’ ending alright tho. That, imo, is the one recurring theme that has made these films entertaining, is the unmasking of the killer. That’s what made the Sleepaway Camp films so memorable as well. So in that regard at least there’s something ‘suspenseful’ to look forward to in each entry, hopefully…

Meh, 3.5/10. It got the 0.5 bonus point for making me realize I haven’t had jelly beans in 10 years. What kind of an asshole eats jelly beans out of a vase anyway;)

Too bad Stephanie Mathis does not have a topless scene !!!