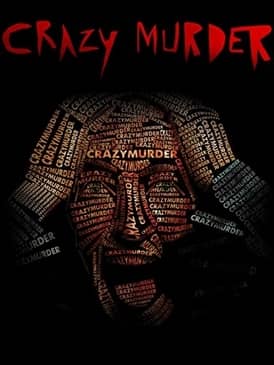 Plot – Spoilers:
A homeless man hovers around a woman sitting on a bench, but she seems idiotically impervious to the impending danger and soon gets stabbed. The next victim also seems a little stupid. At this point you think – this is gonna be one of those movies that will give you a sense of achievement for having been able to finish, despite the mediocrity. But then the homeless man settles down among some trash, takes a shit and smears it over his face and hair before eating some of it. And the film kicks on from there.

Crazy Murder features a pretty impressive performance by its lead actor, especially considering its budget and nature. His ramblings are surprisingly hilarious and interesting and his manic bursts convincing. There is a lot of shit in this movie in between the gore. For a guy who doesn’t get to eat much, the guy’s body has a gargantuan appetite for producing shit, something he doesn’t hesitate to show off.

I’ve seen just about everything there is out there, including 75% of the films on this site – the other 25% are not horror so I choose not to watch them. I can handle any amount of blood, gore, incest, torture…the more extreme the better. But there are three things I have a hard time stomaching: puss, coprophagia, and eating vomit. Well…thank goodness there was no puss in this, as there was plenty of the other two.

Carry on. And as usual, thanks to the folks at effed up for hosting this film. Your dedication to preserving extreme cinema is appreciated.

Wow- I actually had to share this w someone it was so fucked up….. awesome

Ok, so he went crazy from eating his own shit. Or is it a shit eating world we all live in?
Ye-ah, this was very EffedUp. Thanks.

Okay, strange concept for a film. Took me a while to get into but somehow its simplicity works. Decent special effects with its original kind of killings, especially towards the ending.

BEST MOVIE EVER!… I really thought he was gonna chew that used condom like a chewing gum. It would of helped him whiten his brown teeth. Overall Bravo!

OSCAR WORTHY!… Got to be the most f****d up movie ever, at least top five. Thanks EUM!

This movie makes me wanna take a bath in bleach mixed with ammonia ????????

Really fucking good movie actually.. if you like over the top fucked up movies this is for you.

Favorite part: he snatches a baby out of a women’s hands and slams it on the ground exploding its head. Had me laughing so hard.

Well now!It’s about time you have a film the whole family can enjoy!

can’t wait to watch this one with grandma and the kids. something for everyone…

What a movie is this! Or, better: is this a movie? An uninterrupted succession of gratuitous, pure violence, without any reason that can somehow justify it. Completely devoid of a script, the film unfolds on an endless series of animal screams and “fuck off!!”. I am happy to live in a free world, where we are allowed to do almost anything that crosses our mind, but I think that, in certain cases, limits should be placed on creativity, especially when it turns itself into pure destructiveness. What contribution does this film make to understanding the distress of today’s society? Perhaps how lonely we are? Or how difficult is it to communicate? Ok! And to express this is it necessary to build a film about nothing but scenes of extreme violence from the very beginning to finish? Come on, folks!…
I would like to add just one final technical observation: the special effects were great in their realism, with the exception of the shit, which looked more like an amalgam of a poorly made chocolate pudding…

This proves it doesn’t take much in life to have fun: just some free time and some shit

I mean, after a while I checked how much longer this film is gonna go and I realised, there’s still 35 minutes to go! How much shitting can a guy do?! There is soooo much shitting going on! Will the remaining 35 minutes be him shitting himself?! Holy CRAP! Kudos to the actor though, he sure seems to have a sweet tooth! I’ve seen so many insane horror movie, the movie didn’t shock me but I have to say the baby scene got an “oh shit!” out of me. See what I did there? lol Oh and I felt sorry for the pizza guy. This legend buys him a pizza and gets stabbed for it. What a shithead!

WOW, seriously WTF? LOVE this site. where else ya gonna see some shit like this. Can’t wait for #2 to come out. No pun intended…

Shit dont bother me but I dont like vomit, especially when someone is eating it. Thats just fucking gross as. If the protagonist had have been a woman instead I might have liked it a bit more, but watching a guy shitting is not my bag. But kudos to the directors for having the balls to come up with this.

I cried watching this film, but that was because I was constipated. One f*cked up film!

Meh. Half gritty, violent exploitation film (good), half scat fetishism for the director’s private collection (not good). Drags a bit but the atmosphere is what makes it work.

Tnks for Crazy Murders. I love this film and your job is very important!!!!

This guys full of shit!
Had my stomach turn several times

this guy makes GG Allin look like a boy scout