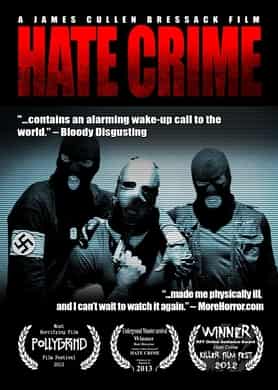 Plot – Spoilers:
A Jewish family has just moved into a small neighborhood from New Jersey and are celebrating the youngest kid’s birthday. They’re not exactly the happiest family around, but their bonds are put to a severe test when three Neo-Nazis break up their party and indulge in rape and torment.

Hate Crime is gentle in its violence but unrelenting in its hate even though lust occasionally takes precedence over the hatred. And while the brutality might not keep up with the intended effect, it’s a pretty interesting found-footage movie with really long takes and clever breaks.

Hate Crime was refused classification in the UK because it was perceived to be exploitative in its racism. A bit ironic considering it was made by a Jewish director.

Fun & Entertaining. Thanks ‘effedupmovie’. You guys are awesome! Don’t forget to lockup your door before you sleep tonight.

This movie is definitely Effed Up. Difficult to watch, but in a good way. This is why your here. Brutal in so many ways. Cheers!

We’ve deleted one comment each about Trump and Biden and closed comments on this page for a while.