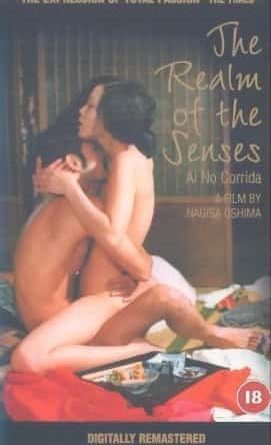 Plot – Spoilers:
In pre-War Japan, Sada a prostitute-turned-maid working at a restaurant begins an affair with the owner Kichi. Sada’s refinement in contrast to her gargantuan sexual appetite has Kichi bedazzled and the couple move into a hotel. While Sada’s obsession with his cock flatters Kichi, he also feels overwhelmed by her possessiveness and the couple soon begin to explore darker sexual realms to reinforce their relationship.

Banned all over the place at the time of its release, In the Realm of the Senses has since confused viewers with its artistry, yet unabashed explicitness.

Best movie
Me and my partner watched together so many times.

Many Thx to the site’s admin and people behind the scene who provide us such a rare opportunity to enjoy the best of cinematography.

The movie was nice but the ending was ahhhhhh….

When infatuation becomes devotion as you fall into what is ultimately self-destruction. Sada is essentially Kichi’s femme fatale and a psychotic one at that. A brilliantly shot period piece to boot. Great film. 4.5/5 kimonos

Thank you so much for posting this.

Hands down the best Effed up movie ever. ❤️Japanese cinema.