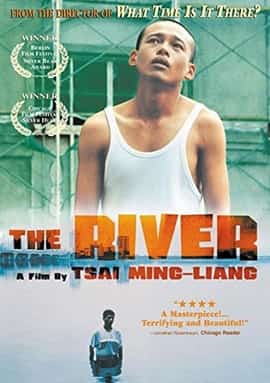 Plot – Spoilers:
A Taiwanese man, Hsiao-Kang, doesn’t do anything much and while doing this bumps into a former girlfriend who interestingly addresses him by the name of the actor playing him – Lee Kang-sheng. Since Kang’s doing nothing much, she invites him to a film shoot that she’s involved with, where he lands the role of a drowned corpse in a dirty river. He gains some sex in return for the stench but also picks up a kind of neck affliction that gets progressively worse.

Massive Spoilers:
The River is a work of pure class that doesn’t shy from darkly comedic scenes like when father and son ride a bike with the father propping up his son’s flailing neck.

And there’s of course the most poignant moment – when everyone rejects you, only your father can inadvertently comfort you by jerking you off.

I tried I really did, but every scene is way too long. Do we really need 15 minutes of them messing with a dummy in the water or 2 minutes of the director lady lighting her cigarette? Oh man and that riveting opening of a dry ass conversation between two old friends infront of a loud escalator. That that the longest 10 minutes of my life.

I just watched a movie with a guy taking a 20 second piss. nice

Hey admin,
isolation
bleak
disconnected
unsettling
So, yeah, thanks for
the spaced out movie !

Hey, EUM guys. Not requesting anything, just recommending. Recently watched a Taiwanese movie called ” The Sadness ” and had to comment on it. Its the most goriest fucked up film I have seen in years and would make a great addition to this site. I think a lot of ppl on here would enjoy it, but like I said, only a suggestion. Cheers. Zed.