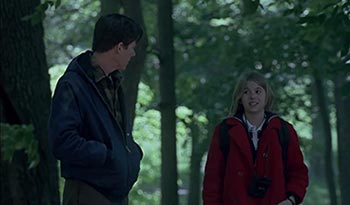 Plot – Spoilers:
Walter (Kevin Bacon) is a pedophile just out of jail having served a 12 year sentence for molesting young girls aged 10-12. He keeps his head down and takes a carpentry job at his former workplace. No friends or family will see him except for his brother-in-law who visits as a kind of payback for Walter’s help years back.

While jailtime appears to have allowed Walter time to reflect, it did nothing, as you would expect, to change his urges. He rents a place overlooking a schoolyard and struggles on several occasions to avoid following teen girls. A sexual relationship with a work colleague Vicki (Kyra Sedgwick) does help in taking his mind off his fight to be normal, but he keeps getting drawn back to the person society has labeled him – a convicted child molester. This is triggered several ways – the schoolyard with fellow pedophiles lurking around, a cop (Mos Def) who drops in uninvited every now and then to remind Walter that he knows Walter’s types never change, a spurned and vindictive work colleague (Eve) who takes it upon herself to inform everyone around of his conviction, a creepy therapist (Michael Shannon) who appears to derive a perverse thrill out of hearing Walter talk about his feelings.

Kevin Bacon is quite brilliant in his performance. In fact, Colin Firth called it the greatest performance of the noughties. There are subtle nuances like the way he walks, and dramatic displays through his enthusiasm, excitement and lust when he’s around young girls.

The Woodsman tackles the age old question – can a pedophile ever be reformed. Initially it seems in Walter’s case, No. The odds and the system are so stacked against them, that even someone like Walter who displays a genuine urge to fight his feelings, soon starts to lose the battle. And yet, Vicki who reaffirms to him that she sees something good in him that he himself doesn’t see yet, lends some hope that while Walter will probably never lose his feelings for preteens, he might find a way to control his paraphilia.

Vicki’s character seems a rare one irl. You would think her experiences of being molested by her brothers would make Walter repulsive and yet strangely, her experiences appear to draw him closer to her. It could be that she sees something humane, compassionate and sincere in Walter unlike in her brothers. And unlike most people who might never get to or want to interact with a pedophile, having known the harmful pedo type, she is able to instinctively see something different in Walter that prevents her from painting him with the same brush.

Favorite Scenes:
Mos Def as the cop strolling into Walter’s room for the first time:
Things had started to look up a bit in Walter’s life until he confessed to Vicki. The cop encounter is the nadir of this down-phase as he makes it clear as daylight to Walter, that he is nothing but a piece of shit.

Walter’s final? meeting with Robin (Hannah Pilkes):
This is the litmus test for the audience regarding Walter and his humanity – does he really not want to hurt the girls as he earlier claimed to Vicki or was it all part of his self-deception to convince himself and us that he is different from the nasty type of pedophiles.

Excellent movie, I saw this when it was released. Very brave performance from KB, and a superb one too. Kyra Sedgwick is excellent too, as is Mos Def and Michael Shannon, one of my favourite actors.

As always, thanks for upload….

Hello, Everyone. I liked this movie very much. Thanks for uploading. Do you have a version without subtittles? Tks!

Fantastic movie! I think this movie tells you that someone can change for the better if that person really tries hard enough. Thanks EUM for this film.

Sexual predators or Men with exclusive taste??? Is Tajikistan better place than West for Men??? Who gets to draw the line of boundaries??? How young is too young for girls to sit on someone’s lap??? Who has right to control basic instinct???

Kevin Bacon’s performance was compelling and impressive. Thankful to have stumbled across this again after having watched it many years ago. A raw, elaborate film that lingers with an emotional complexity unrivaled.

Admin: Am I mistaken for recollecting the particular scenes where Walter utilizes the psychology of snapping a rubber band on his wrist, the therapeutic science of conditioning? I may be wrong, perhaps it was another film altogether… Thank you.

Absolutely superb performance by Kevin Bacon, really makes you feel bad for pedophiles…
Thank you for uploading this gem, EUM!

I poop on your face

Great movie! Kevin Bacon was perfect for this role. You know people like this are pieces of shit but Kevin played the role where you actually felt sympathy for him. That’s how you know he’s a good actor.