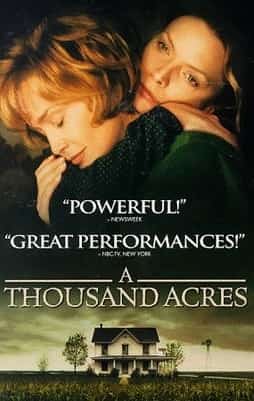 Plot – Spoilers:
A Thousand Acres is based on a Pulitzer Prize winning novel.

Ginny and Rose are sisters who’ve lived on their ancestral thousand-acre farm all their lives. Rose has a couple of girls and recently had a breast removed to cancer, while Ginny is childless having suffered multiple miscarriages. They have a baby sister Caroline who’s a lawyer in the city but the two are very close especially now that both their marriages are fading out. They also lean on each other while dealing with their proud and dictatorial father who also lives on the farm.

The two women’s lives are stirred by the return of a childhood friend Jess after years, and the surprising announcement by their father to divide the property among them. Things get complicated when Caroline is cut out of the deal and Dad starts behaving erratically as he begins to feel increasingly irrelevant. This also pushes the two sisters to confront a dark past that has been unsaid and brushed under.