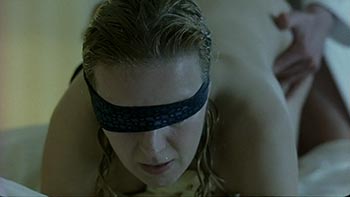 Plot – Spoilers:
Antares captures a few days in the lives of two sets of people. The two groups of characters are mildly interconnected with one critical encounter when two of them literally intersect with each other. The other commonality with all the characters is that most of them live in and around a bleak council-type housing complex. The weather is forever gloomy and the characters’ lives not too dissimilar.

Petra Morze is a nurse married to boring Hary Prinz – Antares kicks off when Andreas Patton visits her from her another city. The two have had a sexual encounter previously that seems like a craigslist type one-off since she doesn’t seem to even know his surname. Her teenage daughter is meanwhile similarly bored at home.

The other group of characters include a supermarket cashier (Susanne Wuest), her Yugoslavian immigrant boyfriend Marco (Dennis Cubic) and his lover Martina Zinner – an older woman recently separated from her abusive real estate boyfriend (Andreas Kiendl). While Dennis Cubic appears to be committed to his relationship with Susanne, he looks at his infidelity as merely a physical performance and nothing more. Andreas Kiendl is bitter over his breakup and desperate to impress on Martina that he is now successful. However his abusive nature kicks in at the slightest provocation leaving her numb to his clumsy overtures. She also seems to gain a lot of her courage dealing with him from the fact that she’s in a fulfilling relationship that he so obviously doesn’t have.

The reason for Petra cheating initially doesn’t seem reasonable. Her lover looks timid and equally as boring as her husband at first. But the more you watch the more it makes sense. He photographs her a lot and she seems to love modeling for him. The attention. With the husband, the conversations are about his passion for classical music and the like. The lover also understands and indulges her kinky side and makes efforts to their encounters as special for her as possible.

Favorite Scenes:
Petra and her husband’s stilted conversation where he mentions the ‘obscene scribbler’ in the lift twice: He appears titillated by the scribbler while also proud about coining the name – obscene scribbler – which is as interesting as he’s gonna get for her all day.

The sex scene where the housekeeping lady is asked to watch them: Initially, Petra on opening her eyes and seeing her, reacts with shame, but then begins to enjoy it. The looks the two women exchange turns the whole scene into a tender lesbian encounter.

The Yugo disco scenes: Marco’s innate small townness shines through on the back of his traditional village-like family-values-inspired desire to have kids.

Andreas Kiendl as the bitter real-estate agent is hilariously brilliant in all of his scenes where he interacts with potential clients.

this is a never ending meandering piece of hot garbage. I think my heart rate actually slowed down to a near death range during this uneventful film.

not bad movie, if you’re a fan of indie films

sounds pretty gay that you saw so many penises, perhaps you were the one looking at them the most.

Well cured and pretty stylish; quite solid and very well put together; the acting is overall decent where not pretty good (apart for one character, but doesn’t ever become unwatchable or puttyoffy anyhow, just not great). It takes it’s time and moves quite low-key, but t does it good. I liked the photography and the general look of it, very well tuned with the story and the rest. The script it’s a little fancy, meaning that it plays with the three story told, but in a functional and not pretentios way. I would surely racconand it, not though to who looks for pure entertainment and the typical mainstream things, more to who s a cinema lover that likes relationships investigations and a pretty realistic deadpan approach, without delving too deep but also avoiding the usual shallownes and banality that is usually put in front of our eyes. … I liked how balanced the being”good”/being”bad” of the charcters rapresented neve goes overboard and keeps them quite human and enough real. I maybe would have liked to have something more of some characters that just slightly partecipate, the husband, the daughter… Yea I would have digged if well integrated in the rest a couple more sections… Overall I found it a quite good movie surely worth a go. If u like something like Fear eats the soul by Fassbinder for example I think you’ll like this (very different as it is).

Oh I exist alright 🙂 U fucking know this

Could you call it a day?
Thanks.

Due to your courteous request I obligingly shall.
Welcome.

Man This Movie is Effed up for sure XD

Man This Movie is Effed up for sure XD and i kinda feel sorry for the brothers in the Movie. imagine what couples do behind they’r backs. Lord Have mercy!!!!!

Great film, good actors. Like many indie films, the ending was inconclusive, but I still liked it.