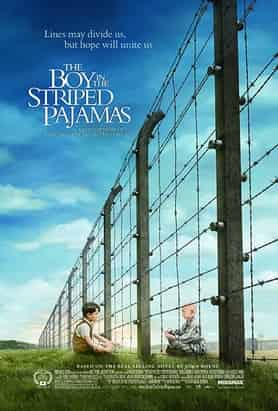 Plot – Spoilers:
A Nazi officer who’s rising up the ranks, moves to the countryside with his family that includes his 8 year-old son Bruno and an older daughter. Bruno is bored in the new house with no friends and often wanders outside – something that’s been strictly forbidden by his parents. On the other side of the woods, he finds a concentration camp that he thinks is some sort of farm with workers. There, he befriends a Jewish kid and the two begin to regularly meet.

The Boy in the Striped Pajamas attempts to tackle the Holocaust from the POV of a Nazi family whose members fall into a spectrum in their distaste for Jews – Bruno believes Jews are the enemy with some good apples among them, Mother is fine with the Jews being shunted into camps but can’t reconcile to gassing them, the daughter is evolving in her ideas, and Father can’t afford to think, as he’s now in charge of the camp.

Unlike a lot of Holocaust movies that seek to humanize Jews in contrast to the Nazi narrative, here you have the humanization of a Nazi by flinging tragedy at him. And this caused the movie to be criticized by some, for channeling the audience’s sympathy towards the dead German kid, while fading out his Jewish peer who also died with him.

Fantastic film with a great unfortunate story. This reminds us that we were never born with hatred, but taught to us instead. It’s hard to believe that this was based on actual events. Very sad. Thank you EUM for including this film on your site. I think it’s definitely a worth to watch.

Tragic movie, beautifully done. I think it would have had more impact in German, as the British accent somehow doesn’t go with the scenario. But all in all, an excellent inclusion on this site.

Not so good , quite boring tbh

If the ending did not make you shed a tear, you are not human.

this is one of the fews movies in effedupmovies thats heartbreaking, it was slightly fucked up to say the least, well made movies that makes u shed tears. i love how it illustrates the movie till the end <3

Daaaaaaaammmnn! Now that’s what I’m talkin’ about! What a GREAT, GREAT film! One of those that reaches deep down inside you and gives your emotions a good stirring. And THAT in my mind is what truly constitutes a Effed-Up Movie. One that you can’t just watch and move on to the next without pondering over what you just saw. What you just experienced. 10 out of ten across the board on this one.

Thanks EUM, for helping to enrich my culture just a little bit more each day I spend with you.

Great movie, there’s no victors in wars only victims.

Disturbing in the best way. I’ve seen this a few times and always have a few minutes sat in silence afterwards. The end shot is so powerful.

Damn I’m just now seeing this for the first time, and did not necessarily expect Bruno or Shmuel to die…like on screen.. shits fuckin sad. Those boys are adorable I *almost* cried at the end kinda surprised I didn’t lmao

this was recommended to me by so many people and i’m glad i finally decided to watch it.

Beautifully done movie and an excellent book as well.