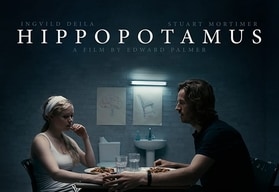 Plot – Spoilers:
Somewhere in Scotland, Ruby is being held captive in an underground room. Tom, her captor, claims he’s kidnapped her and will keep her there until she falls in love with him. There are slow reveals that suggest things may not be as they seem.

Thoughts on the Ending – Massive Spoilers:
Rather than Tom’s lukewarm lovestory, it’s more likely that what he told her at the beginning is the truth. Ruby will be forced into unlimited iterations until she actually falls in love with him. Her notes to herself are from a previous version that still had some control of her memories and who realized she would soon be Tom’s mindslave. The number of matchsticks found indicates a fairly-long period of captivity and her white-top and shorts version might also have been repeated before our eyes.

What where you looking for in a captivity movie? Single set piece, lots of dialog, slow burning development. I’m trying to figure out what you expected to see. Cars blowing up? This is like watching a movie called Gay AF and shocked at men kissing.

is Gay AF II out on VHS yet?

Good not great slow burn but you’ve seen it before. Just think Momento had a baby with The Room. Good watch but I don’t think there’s rewatch potential.

Not bad! love this site

aww,Tommy has a crush on me,how cute ????
wtf tryna spy on her then violently blowing his nose?! also she’s mad ugly
but all of this could’ve been solved much sooner if he just brought her to the damn hospital
unless he killed that dude?i’m not sure if he did kill him but it’s the only explanation why he would do this.he’s still retarded to go through all of this shit just to bring back the most boring bitch with no personality whatsoever also the sex scenes were so fucking painful to watch that’s the most boring sex i’ve ever seen terrible so fucking vanilla and predictable it’s ridiculous
WTF IS THAT FUCKING ENDING BITCH!wtf tf ????????????????????

ahh who tf dared to dislike my comment i am mad hurt ????

MAJOR SPOILERS The entire backstory of their relationship is made up of false memories he has planted in her mind through repetition (note that all the “memories” of their past relationship take place in dark candlelight, like their candlelit dinners underground). The number of matchsticks hidden in the wall shows how many times they have gone through this same scenario. The title of the movie refers to the hippocampus of her brain, which he has damaged to fuck with her memory.

He probably likes her because she has big boobs.

yeah,i figured at the end and i also figured that i was too lazy to erase all of it.i take notes while watching and then comment.i agree,pretty much the only good thing about her.why am i getting dislikes tho ☹️????????????????????

I don’t know, your comments are very stream-of-consciousness. I only give dislikes to the creepy pedos on here. ????

big fat piece of uneventful boring dogshit. whoever made this should not have made it.

Actually quite a good installment in the kidnapping romance genre. A slow burn but the ending is quite worth it for at least daring to be a little different than the typical Lifetime schlock. Tom’s voice is quite appealing.

Jesus what a boring movie. Nothing happens!!

Wanderer
Reply to  The White Horseman

You are boring. Nothing happens in your brain.

Hey admin,
Thanks for your hard work running the site!
Watching the movie made me feel CONTEMPT.
The character Tom justified KIDNAPPING (so he could HELP the girl).
Unfortunately a sliced jugular didn’t kill him.
It is impossible to accept he was HELPING the girl
with syringes, pills, sleep deprivation and
sadistic mental TORTURE.

Much better than I expected; I like the ending as well. The pace is slow, and it has flaws, but overall it was much better than a lot of the captivity/imprisonment movies tend to offer.