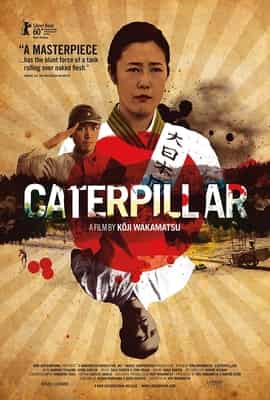 Plot – Spoilers:
In WW-II Japan, Kurokawa went off to fight a war, something his wife Shigeko never really approved of. Now he’s back, missing four limbs that he exchanged for three medals. He’s also gone deaf and can barely grunt out his needs. His sister and father are unsure what to do with him but feel blessed that they have Shigeko to palm him off to.

Shigeko is mostly devoted and feels compelled to fulfil what she’s been taught are her wifely duties. So, soon after his return, when Kurokawa writhes around trying to mouth that he wants to pee, Shigeko shares in the moment by mimicking his struggling expressions without realizing how absurd she looks too. Kurokawa then proceeds to chomp on the belt of her pants signaling that he’d like to fuck her. Apparently his dick is still working. He’s also developed a voracious appetite for food, and as winter turns to spring, he demands even more, eating into her share of their sparse meal.

For a while, the respect of the locals for her devotion and Kurokawa’s stature as a veteran hero keeps Shigeko enthused, dedicated to the burden at home. She wants to be proud of him, to serve him and to believe he is a hero, but her real-life experiences with him behind closed doors are starting to shake her spirit. And the more contemptuous and frustrated she gets, the lesser Kurokawa, who’s carrying the guilt of his warcrimes, feels like a human.

Caterpillar is based on an Edogawa Ranpo short-story. But this isn’t as brutal as the one featured in the Rampo Noir anthology. This is more a lament on the propaganda of the pride to be had in fighting a war that cloaks the personal tragedies of millions under the guise of honor and valor.

Finally! I requested this about a year or so ago, disturbing and Funny at the same time lol enjoy.

I love these kind of film, any similar to this?

OJ not Simpson
Reply to  Jedaaa

“The lesbian donkey at the nymphomaniac stewardess convent”
Check it out… thank me later!!!

This is the Human Centepide for the arthouse crowd. 😀

Anybody interested in this movie should check out serial rapist (1978) another masterpiece created by Koji wakamatsu.

Not bad story not finished and the pace is alright

Def a 8 out of ten for the ending

That’s why I love Japanese and S. Korean movies. They can be really fucked up and yet have depth to it. This one is not bad but the pace unfortunately is quite slow. They could have done much better exploring more the wife’s dark feelings towards the husband and the consequent fucked up acts that could happen. But the director was too busy trying to send a message.

As said by the person above, the opportunity wasn’t taken to fully expand on the wife’s dark feelings to her husband. Nevertheless the film adequately conveys the feelings of guilt, despair and nationalism. The clips of WWII were nicely done imo in the context of the film. A solid 3/5 war medals.

I liek to put pingpong ball in my puss puss