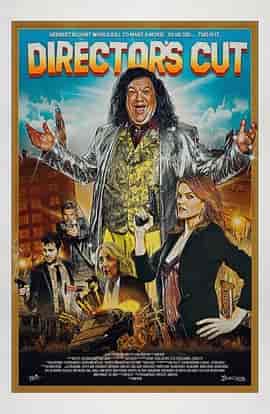 Plot – Spoilers:
A crowdfunded film Knocked Off has been hijacked by one of its principal contributors, Herbert Blount. Blount has rewritten and re-edited the film to include himself and to also present his obsession, lead actress Missi Pyle, the way she deserves to be. Since Missi is hostile to his overtures, Blount really has no choice but to kidnap her.

The film within this, Knocked Off, is about a killer who recreates crime scenes of famous serial killers and so this presents opportunities for some decent gore. But most of Director’s Cut is focused not on Knocked Off but on Blount’s amateur attempts at editing his version into it. There’s also a voiceover running through the film that sounds like Penn Jillette until you realize, it is in fact Penn Jillette.

Random Thought:
Initially, trying to catch the action on screen against the voiceover can be disorienting as you realize that persistent voiceovers are not the same as subtitles. Probably because they’re not necessarily following the action onscreen.

After 3 or so weeks offline, catching pedos, rapists and an assortment of various scumbags in Melbourne Australia, I am having a well earned rest and reconnecting with EUM and all who frequent this site. Just to say hello to everyone. In other words, IM BACK, like it or not.