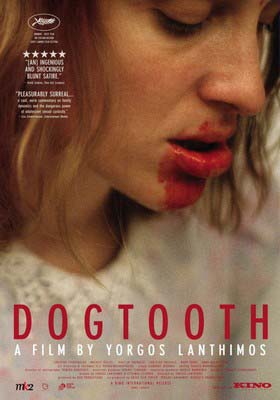 Plot – Spoilers:
A family of Father, Mother, Son and two Daughters live on a remote property. The Father has a cult-like influence on the Mother and the parents seem convinced about the dangers and impurity of the outside world, and so have literally built a world of their own in which they have secured their overgrown, yet baby-like children.

The kids who vary in ages from teens to 20’s have been trained to believe that stepping outside the property will cause death from dangers that include random cats. Their behaviour and daily life has been programmed and brainwashed into mechanical patterns and the kids follow obediently for the most part. There is enough evidence of brutal punishment to suggest past acts of rebellion or deviation from the parent’s scripts were met with instant reproach.

To make sure screwups don’t happen, the language at home has been changed so that the kids believe certain key words have a different meaning. For example, cunt is keyboard, salt is phone.

Dogtooth seeks to answer questions about the human spirit, curiosity and rebellion, and whether these can be thwarted in the most carefully constructed and cloistered world.

Favorite Scenes:
This is one of those movies which is essentially a collection of favorite scenes due to the bizarre nature of the world the family inhabits. But the scene following the trespassing cat, where they’re all on their fours, barking away with much enthusiasm is hilariously dark.

movie was kinda boring, throughout the whole movie i was waiting for a climax, and it never really came, just a bunch of sex scenes and brainwashing from the parents lol

Weird trip.. certainly not as good as the killing of a sacred deer

I heard they licked each others shitty assholes between takes.

absolutely fucking garbage film i almost fell asleep, faggots will call this deep to seem intelligent when this entire story could be made up by a child 0/10 fucking garbage abhorrent shit worst film ive seen in my life

this is the worst film ive ever endured, and i say endured because ‘watching’ this sounds like i’m phrasing it as if this were a film i had watched. this was not a film, this felt like a part of my soul left my body and i’ve been robbed of some kind of unseen achievement and reward due to the fact this has nominations and awards. this is how a disturbed baby probably views adult life and how they’d direct it. i feel like ive discovered porn lower than pedophilia. i regret watching this and fuck whoever said in a youtube comment section that this is thrilling and disturbing. fuck you

The initial idea was good. But after 15 minutes you are accustomed to the whole situation. Story needed much more and much faster development. There was room for more ideas. But often those scenes are too long. I would guess it would worked much better as a book or novel.

I want to lick your keyboard. Who wants to lick my keyboard?

don’t know what to say about this movie ..what a strange movie it was ..you had to feel sorry for the son but at least he had sex while his sisters had no idea about the world of sex until it was to late no hardcore nudity or sex but just bits here and now …I would tell people to watch this movie its enjoyable ……

Though a strange little film it is intriguing and kept me engaged. Surreal at times and also darkly comedic. A hard one to categorize but for me it was worth the watch. 3.5 / 5 zombies.

Sister and brother fuck each other disgusting