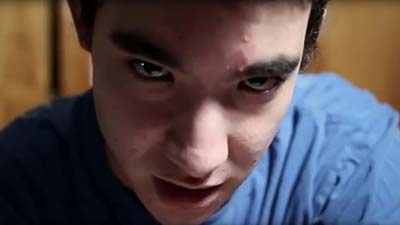 Plot – Spoilers:
The Cohasset Snuff Film is a sort of mockumentary about high school student and serial killer Collin Mason who murdered girls who went to his school. Collin was a wannabe director who admired the works of Tarantino and Scorsese and sought to create the ultimate teen snuff movie by taking out his girlfriend and other bitchy cheerleaders who he believed deserved to die because they didn’t understand and appreciate his true worth.

In the movie, a local psychologist profiles Collin’s childhood of neglect that eventually fueled his attempts at epic infamy. You also have interviews with Collin’s friends, aunt, officials, and Cohasset locals who’ve since commercialized the killings as artwork. All of this intercut with Collin’s videos that include him detailing his plans, his hatred and of course every murder.

Collin Mason uploaded his snuff videos onto the internet from where they were eventually taken down from most places by law enforcement. Well, that is the story.

So, is the Cohasset Snuff Film real? The movie was promoted as being real and an expose on the coverup by government and Cohasset town officials who attempted to blot out the killings and snuff videos. In reality, this is just a work of fiction and no such killings ever occurred.

Random: It is interesting that the name Collin Mason has the same initials as Charles Manson.

At fucking last. I have literally been wanting to see this since its release and it was legendary in how of a pain in the arse it was to ever find anything on it online. Dont know how you found it but thank you. ???

This was ok. Not the best not the worst. Decent acting but no real twists.

Not too great, the story is poorly written, script is cringe at best, characters are not believable.
Some of the shots are not completely bad even with handheld, but it’s pretty bad.

couldn’t get past the forty minute mark here— our boy sells like a knock-off elliot rodger; i have a pretty high tolerance for nonsense acting but i can’t manage to feel anything about this guy really just gives me the vibe that i, a fat ass queer with fibromyalgia, could beat the shit out of him if i wanted.

i like the vibe set up at the beginning, kinda building him up to be this mysterious maniac. i would be interested to see other stuff from this director, i like the atmosphere of this movie a lot, honestly. hopefully in their other films the script and acting will be a little less cringeworthy.

thanks for the pick, eum!

Just came across this site and have been enjoying every minute, and thought I would express my two cents.

I feel the actor who played Collin Mason was a terrible choice. Now, the scranny looking teen with acne was well put for the part. But, the character was completely unbelievable and emotions were utterly pathetic. The details were unrealistic from the detective during the interview saying he used a night vision camera, to the choke and head bash of the tire iron. It doesn’t take four seconds for a person to go unconscious, not to mention that fast blood splatter from striking the head only once, it takes a good eight to ten times before blood splatter is notifiable in large quantities. I felt there needed to be more of a meltdown in the movie theater being he was possibly seen or noticed and cause and effect should have triggered in him. The mother was bland with no sign of emotion and the ending with him cutting his throat it takes a lot of strength and courage to attempt this which I feel he did not have, a shotgun under the chin would have been more realistic.

Brought to you by the league of very gentle mans who think the Columbine killers were misunderstood outcast loners instead of banal Nazi bullies. The acting is terrible, but let’s also give credit to how abominable the script is. Sounds like it was written collectively by /nosleep.

Really bad. Acting was low budget. They didn’t pull you into the aganst and hatred and turmoil of a REAL LIFE serial killer