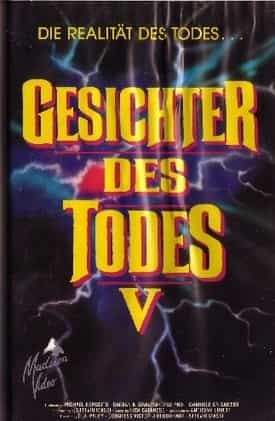 About:
Gesichter des Todes V, literally German for Faces of Death 5, was marketed as a continuation of the series, but has no connection with FOD. It’s more like a ‘best of’ from earlier works of the filmmakers, and also includes a few scenes you’d have already seen in Faces of Death or Traces of Death. The title was probably chosen to capitalize on FOD-4 that had come out a year earlier.

This one shocks early on, by emphasizing on dead children including (drug) mule babies, the Lindbergh case and killer Albert Dyer. Murder scenes from other killers like Robert Nxon, Otto Stephen Wilson and Adolfo Constanzo are also in here. And then there’s the usual trope of accidents, religious and political violence from around the world that’s probably dated now, 30 years on. 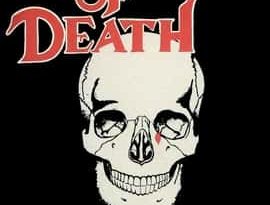 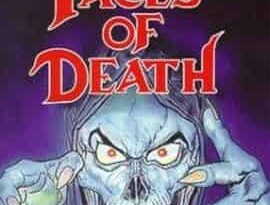 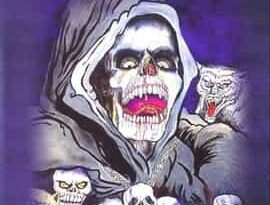 In celebration of the holiday, here’s a couple of quick little tales….

In the summer of 2017, we get a call – possible suicide, GSW (gun shot wound). We get there with lights and siren a blazing, breach the door, and there’s the guy sitting in an easy chair. His head is slumped, his chin is resting on his chest, his shirt caked with clotting/drying blood. In his right hand is what looks like an old cop’s gun – a .38 revolver. No movement. No response. No obvious sign of life. The first thing we’re required to do is secure the weapon for safety reasons, which I move to do. I very gingerly grab the barrel of the weapon and start to pull it from his hand… and as I do his head pops up and he starts trying to talk. You should have seen my partner and I jump. From the amount of blood… from the smell… (the guy shit himself) we were certain the guy was dead… but it turns when he put the gun in his mouth and pulled the trigger, instead of angling the weapon upwards, sending the bullet thru his brain, he fired strait back into the back of his mouth. The bullet went right thru his neck and lodged in the wall behind him. The guy lived but is severely disabled. He can’t speak or eat normally. Liquid thru a tube….

2.) Last March, we get a call for “Crack Central” , a notorious apartment complex on the south side known for drug activity and gang violence. Needless to say, the calls from this place are always an adventure. So the call comes in – possible suicide. NFD (no further details). We get there, climb the stairs to the second floor, and as we’re walking by the window I look in. It’s dark but I can make out the guy sitting on the couch – minus his head. We breach entry and get a better look. Some of these bangers have a thing about buttoning the top collar button of their flannel shirts while leaving the rest unbuttoned – which is exactly how this guy dressed himself. From his buttoned collar up there is only a piece of flesh about the size of my thumb standing strait up… and nothing else. except for a few “flaps” hanging over the collar. The guy, a kid as it turned out because he was only 17 years old, used an old sawed-off double barrel shotgun, firing both barrels at once with the help of a show lace tied to his big toe. Now, you have to imagine the mess. The blast radius of this thing was enormous! There were piece of tissue, bone fragments and brain matter covering the entire wall behind him. The was even a fist-sized chunk of brain wedged in the heating/AC vent over where the body was sitting. Fast forward to August. We get a call for “Crack Central” and I recognize the apartment number. Not sure why, I just know I’ve been there before.We arrive, climb the stairs and sure enough it’s Mr. Headless GangBanger’s old place. My partner is on the radio and I hit the kid with Narcan injection and within seconds he’s up and around and extremely agitated which sometimes happen, especially if the patient is injecting a “speedball” – a mix of heroin and cocaine. We get the kid settles down enough for transport and I start looking around and I can’t believe what I think I’m seeing. Upon taking a closer look, sure enough Mr. Headless Gangbanger’s hair, tissue, bone fragments and brain matter are STILL all over the wall… just painted over.

Dude publish it as a book.

I do apologize but I neglected to mention in #2 that the kid on the second call at “Crack Central” OD’d… but I’m sure all you smart mofo’s could figure that out.

Happy Halloween to all… and to all, no matter how tough the situation might be, it’s not worth taking your own life. Let someone else do it. =)

I have found new respect for u. Your job is tough and not for the squeamish and when u go home after your shift, u have to seperate yourself from the crap u see everyday. I too have seen scenes similar to yours in my work and must detach myself from them or else I would lose my mind. Its a dirty job but someones gotta do it, but at times it can be rewarding when a life is saved. Thats one reason I do what I do just as u do what u do. There are some things that always stick with me such as dead kids and bloated floaters and anything to do with CP, I dunno what your pet hates are but I am sure u have yours as well. I wish u good luck and health. Cheers, Zed.

Zed… I gotta say, I too have a new found respect for you. It takes one hell of a man to offer the words you did, which I appreciate more than you know. I apologize unreservedly. I really really do. I offer a complete and utter retraction. The imputation was without basis in fact, and was in no way fair comment, and was motivated purely by malice, and I deeply regret any distress that my comments may have cause you, or your family, and I hereby undertake not to repeat any such slander at any time in the future. If you weren’t half a world away I’d buy you a pint or three. You’re a good man and I’d be honored to be your friend. May the sun always shine on your face, and may the wind always be at your back.

Thank you, your words affected me deeply, you almost made me cry, goddamn it. I too am regretful about some of the things I have said, sometimes the pressure of the job gets to me and I write things here that I shouldnt but thats no excuse. So I am sorry. I would be honored to be your friend too, and if Im ever in America maybe I will have a few beers with you too. We would have such stories to share. I will sign off now, take care out there and stay safe. Cheers, Zed.

Look at you two! Getting along! I think I am tearing up a little too…

Two dudes having a romance in this comments section

this comment section was a roller coaster of emotions, found out lecter is a cop (+1) , zedman and lecter mend bridges and fallen in love, and the movie was great. damn.

Just to set the record straight, Dr Lecter and I are not gay or in love. We are just a two guys who had differing views about each other and have now resolved our differences. We both have stressful jobs where we see the worst of humanity and that has been a factor in burying the hatchet ( not in each others heads ). Btw, I am the cop and Lecter is the EMT. I appreciate all the nice comments above ( thx Eevie ) and just ignore the haters. I cant speak for Dr Lecter but I would think he feels the same way. P.S. Doc, if you are reading this, any input you have would be appreciated. Cheers brother. Zed.

Thx, you are good people. Appreciate your replies. Zed.

That exchange was cool to read,the world sucks enough & is well overloaded with cunts,which both you gentlemen are not,good on ya fellas

#Ron Jeremy, well said, let me put you in the category of good guys. You tell it like it is with no bullshit and I admire that. So thank you for your comment. Cheers! Zed.

Cheers to you, Hedgehog… You’re one of the good ones. You and Zed both.

Welp, as far as being gay… I eat more pussy than cervical cancer. So there’s that. And the ladies like it that way. They really, really do. Especially when you have an understanding of female anatomy. What you have just witness here between Zed and I is a simple matter of earning each other’s respect. Something most of the anal polyps out there believe should automatically handed to them automatically because they live and breath and cry out for attention by putting shit in their faces and painting their hair pink and green. That isn’t how it works, fuckbags. Respect is earned. Not given out like Halloween candy. And until then, until you actually earn someone’s respect… you’re just another meaningless fleshy sack of mostly waste and water just waiting to be wheeled away lifelessly on my stretcher. Something I get paid very well to do.

Well said Doc, couldnt have said it better myself. U have such a way with words that make me lol. ”Anal Polyps”, I cracked up at that one. Dont get angry at these losers, life is too short as I have just witnessed the other day. A head on with a semi trailer and two dead, their bodies so torn up that the ambos had to take them out piece by piece. Kind of puts a perspective on things. We are all mortal and and never know when our time is up. Anyway, nice to hear from u, have a great day, stay safe and take care. Ur friend Zed.

Anybody yet mentioned the fact that they are doing a REMAKE or REIMAGINING of this as we speak?
It will have a Meta Movie kinda turn on the original but man….creativity nowadays really must be a dryland for someone to come up with the idea of remaking FACES OF DEATH. 😀