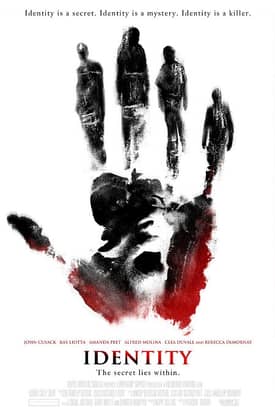 Plot – Spoilers:
A convicted killer Malcolm Rivers is due to be executed. A late-night hearing is rushed to determine if previously not-produced evidence is sufficient to pronounce him legally insane.

In the meantime, a group of 11 strangers congregate at a motel during a storm. They include the motel manager, a hooker who’s made enough to start a new life, a family who’ve just been in an accident, the driver of the limo that caused the accident and his passenger – a hasbeen moviestar, a cop and the prisoner he’s transporting, and a recently-wed couple.

One by one the group is killed off and everyone starts suspecting everyone else. So where does the killer Malcolm Rivers fit into all this.

very good twists, kept me guessing and did not get boring!

Damn, that was a good movie! More twists and turns then a mountain road.

the twist is just fabulous !!! love this movie .