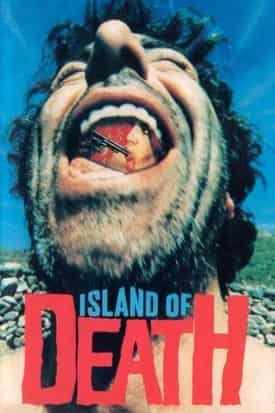 Plot – Spoilers:
Celia and Christopher are a couple holidaying in Mykonos. Christopher appears insanely jealous and crucifies a man just for eyeing Celia. But it soon emerges that the two have been on a killing spree and landed on the Greek island while on the run. The murders don’t abate as the couple find justifiable reasons to kill pretty much everyone they meet.

Some of the killings aren’t explicit and the gore and effects is often implied rather than shown. But that’s forgivable because of the sheer number of perversions and effed up scenarios the couple create and find themselves in.

Very controversial in its day so much so that the uncut version is still banned in many countries, so much thanks to the people at EUM for showing it. This director went on to make The Zero Boys a few years later, a much milder film but still very good. ( not a request ). Very appreciative of all your work to posting these rare movies. Cheers.

Watchable but I think time has taken some of its notoriety away from it – but it was a ‘nasty’ back in its day.

I liked this movie, especially considering it was released in 1976. Must’ve been shocking to audiences back then. Still holds up as a good effedup movie

Yeah… this movie both sucks AND blows. But that’s just my opinion. And you know what they says about opinions. Opinions are like assholes. We ALL have one… and they ALL stink.

*MY FAVORITE PART WAS WHEN THE TRANNIES WERE MURDERED!!*