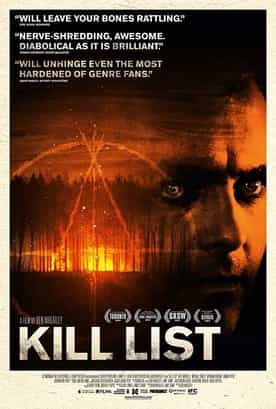 Plot – Spoilers:
Jay and Shel are a bickering couple who’ve served in the army. They live above their means and are currently running short on cash. Shel has been badgering Jay to look for work but Jay pretty much knows only how to kill. He on-and-off takes up jobs as a hitman with ex-Army buddy Gal and is right now walking the edge of his own sanity. So when Gal offers him a kill list, Jay isn’t exactly cold-footed to take up the job.

As the pair go about killing men in their list, things go out of control when Jay insists on following a pedo-ring they stumble upon during the job.

Kill List is an engaging thriller and while the violence is sparse, there’s a scene of a head being battered with a hammer that you will take away for a while.

Thoughts on the Ending – Spoilers:
It would seem like Jay is the chosen one for the cult who’ve been observing him for a while. And his final act of murder frees him from all emotional connections, so he can now be a truly disconnected leader. Why was he the chosen one? Something to do with perhaps a rampage he went on while in Kiev, which keeps getting referenced.

Slow start but stick with it.

This movie was great, but the ending was liken to “The Serbian”.

95 people on Rotten Tomatoes liked this movie.
They are all psychopaths with no taste in fine cinema.
I found myself thinking what the bloody ‘eck when I was watching this disaster of a movie. This was a mess. Nothing makes sense. Ben Wheatley was on crack when he made this. Do not waste your life watching this movie. This movie gave me a head and stomach ache. It makes me sick. 0 stars.

The fact that I made it to the end of the film is an achievement in itself and shows that I do not value my time at all. To think of all the delicious rabbits I could have cooked in this time.

I love the use of guns in this movie!

Fiona- We have an exciting opportunity for you. Please get in touch.

Excellent… Corking thriller with enough edge and grit for any true seasoned eum fan. Classic homage to decent UK thrillers to last few decades and modern enough to do something New. Thoroughly enjoyed it

This movie was great. There really is a time and place for everything, yet he failed to heed his own words, and he paid a great price for it and yet failed to even realize it at the end. I really enjoyed this. The character interactions were great and funny at times. Makes me wonder sometimes about private military contractors who are talked into doing easy jobs by old friends but suffer with ptsd in silence or from severe depression, and then go unhinged on the job resulting in casualties.

a serbian film ending with no explanation. I’m a little confused but still satisfied.

Buildup more satisfying than the climax, for me at least.
Solid thriller tho’

I love this film.

more shit to gag on, u a holes r realy stupid here, if think u might all need professional help so suck my right testicle hard

I wonder what they see on the T.V in the library of the librarian ..??