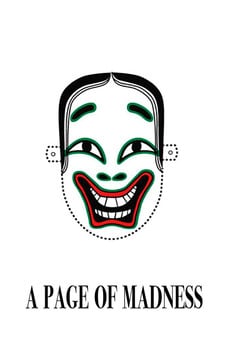 Plot – Spoilers:
An old man works at an asylum as a sort of janitor and keeps an eye on the inmates in their cells. But he has special concern for one particular woman who it turns out is his wife. The doctors and other staff however are unaware of this relationship.

The old man’s daughter turns up at the asylum one day to let him know she’s getting married. The father-daughter share an uneasy relationship that suggests a previously disturbed family. Some critics have inferred he was cruel to his wife earlier, and his hovering around her cell is a reflection of his guilt. But what a beautifully tragic scenario – to work in an asylum where a loved one is housed.

The arrival of the daughter and the degeneration of his wife has a debilitating effect on the old man and he soon starts drifting between reality and fantasy. In a cruel twist of fate, the daughter’s husband is prone to depression and will later become an inmate at the asylum.

As A Page of Madness was a silent film, the music featured in the version here was added recently. For a film that’s nearly a hundred years old, insanity has been portrayed quite magnificently and the scene where the inmates go nuts over the dancer is truly memorable.

As unsettling a film as I have ever seen. I assume the lack of titles is due to the live narration that Japanese silents would have. It makes any narrative rather hard to follow but the imagery and atmosphere are impeccable.

Proof Japan was weird af before the bombs