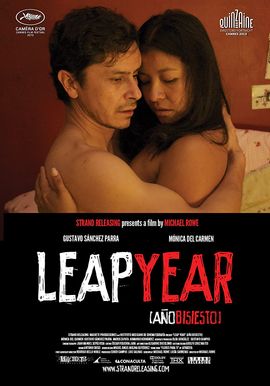 Plot – Spoilers:
Laura lives by herself in a small apartment in Mexico City, writing freelance articles for business magazines. Her loneliness is only punctuated by spying on her neighbors, bringing home one-night stands and conversations with her mother and brother that are soaked in lies about an active social life. She is so lonely, she has imaginary relationships with her neighbors and even masturbates to the couple next-door being casually intimate. And when she’s bored enough, she stubs out the community-driven ants that line her window panes, with a cigarette.

The year is a leap-year and Laura starts marking down the days to February 29, the 4th anniversary of her father’s death. A man who holds great significance in her life. It is strongly suggested he used to abuse her from when she was 12 and later left her their house following his death. Perhaps as compensation. Or as a reward. Maybe reward seems more fitting, because there seems to have been no atonement from him. And so, Laura carries this hollow pain that starts to manifest in her sexual life when she brings home Arturo, a wannabe actor. What begins as ass-slapping, morphs into harder areas, as she initially encourages the sexual violence to retain his interest in her. But later, to also fill the increasing void.

One of only a few movies out there that adeptly (and artfully) demonstrates the mind’s ability to defend itself by sexualizing trauma. A very poignant and potent film about the tragedy of emptiness.

Another tragedy is how you could easily find a nice, fluffy little chalupa to sub to you in Mexico city but the only “kink”Mexican American women have is teasing guys and bragging to their friends about it! Dry, boring, vanilla saturated Women that think that a guy has been given a high honor if she lets him everso lightly touch her ass!

Everytime she lies about her life while on the phone. It broke my heart. Come to me my little Mexican Mocha. I will feed you shrimp and won’t pee on you.

like when her brother’s crying in her lap cause his GF broke up. Like how do I give a fuck, what information do I gain just stupid and boring

Tbh I’d not even categorise it as an effed up movies as the effed up bit in it is about 2 minutes long as she’s trying to get this guy to murder her while she’s giving a hand job but bruh…. This request didn’t even happened and even if they’d have made it happen I’m pretty sure they would not have been able to make it any close to the Serbian film where our good ol’ Milos is chopping that bitchs’ head off with a machete while he bucking her

Hey admin
Thanks for your film Ano Bisiesto
the film begs the question
If your old lady VOLUNTEERS to
let you kill her, you follow thru,
what happens to you?

1. get off using defense
Death By Misadventure
because an accident occurred
due to a risk that was
taken voluntarily
2. f***d

It would’ve been and effedupmovie if something effedup had happened. [SPOILER]Aside from golden shower, nothing actually happened. 3/5.