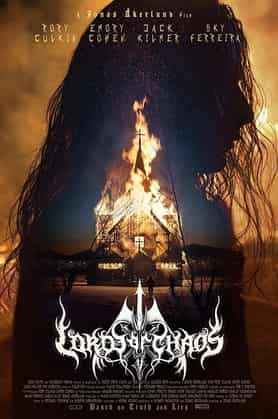 Plot – Spoilers:
Lords of Chaos covers the early Norwegian Black Metal scene, in particular Euronymous, his band Mayhem and his relationship with Varg Vikernes. From being known and feared as a ‘true’ extreme guy, to losing control of the leadership as Varg’s prominence grew, the movie fictionalizes the stories and legends which were anyway based on hearsay. What comes through though, is the confusion and fears in a bunch of kids who’d created something that was too explosive and huge for them to contain or handle by themselves.

*SPOLIER ALERT*………………….,………………..,……………………………………………………………………………………………Okay, but it kisses Euronymous ass six ways to Sunday throughout the whole film and makes Varg look like the poser turned epitome of racist evil-all so it can honor a Man that was every but as bigoted and violent in his thoughts as Varg. Necrobutcher has recently stated that he wanted to kill him himself but Varg beat him to it! I believe that Vice had something go do with the making of the movie was anything they get their grimey little hipster hands on is sure to follow their typically far lefty narrative. Good on violence, surprisingly more sex and nudity than would be expected (and ya gotta love the fuckin’ church burnings!). But don’t expect much in the way of historical accuracy.

Love Mayhem! This movie was fun to watch realizing it was only based on truth. I agree with basically everything the above poster, MR BRIMSTONE wrote. Cheers!

Rory Cuklin is far better-looking than the real people portrayed–so that makes up for the discrepancies for truth versus H-wood inaccuracies. Good versus evil within a genre of evil—how else could a movie sell if evil versus evil results in evil being killed and evil being put in prison?

This movie is extremely inaccurate. Hollywood version what do you expect.

Can’t agree with the comments saying Euronymous was depicted as a saint in this movie. It showed him bringing up the idea of suicide to his friend and bandmate Dead, exploiting Dead’s suicide for publicity, aiding Varg in the burning down of one of the churches and praising someone for committing a murder. The movie shows him as a flawed individual.