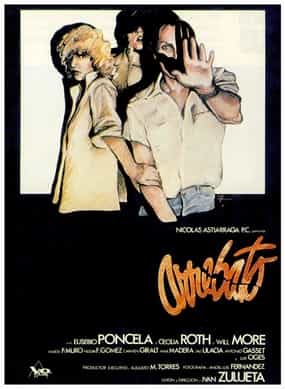 Plot – Spoilers:
A horror movie director Jose, who is coming out of a relationship with a fellow junkie Ana, is editing the final bits of his movie and frustrated with the efforts. He heads home to fade into heroin but finds a package containing a film from Pedro, the cousin of an old friend. Jose had met Pedro while scouting locations and was intrigued by his bizarre passion for cinema and sexuality. Though they only met twice, Pedro made a deep impression and was able to revive a nostalgia and sentimentality that Jose thought was long buried.

Pedro is a tormented filmmaker who thinks he’s a greater artist than he is, but whose pure love for cinema and film is admirable and tragic. And it is this obsession with film that bizarrely starts to tap into weird realms, ultimately bringing the camera to vampiric life.

Arrebato has been slotted into the Vampire genre here, not just for the vampire metaphors but mostly for a beautiful short vampire film that appears within it.

Thank you so much for uploading this.

Don’t really liked it… Beautiful in a sense of cinema.. But didn’t really do anything for me

It’s heavy on metaphors and the character of Pedro is hard to pin down. I’ll need to watch this one again in the future. The vampire movie within the film is great, though, despite lasting only a minute or two.