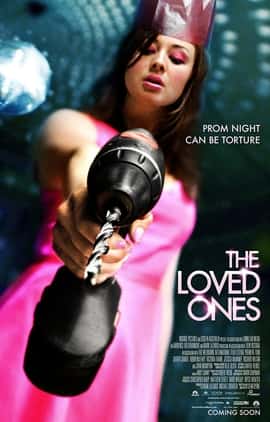 Plot – Spoilers:
Brent is still dealing with the afterglow of an accident that killed his dad. So he indulges in cutting and edging suicide, until he realizes that he values his life when he winds up bound to a chair for having politely refused classmate Lola’s prom invite.

Lola lives with her braindead mother and a crazed father whom she’s got wrapped around her fingers. And the two have been killing boys from back when Lola was a little girl.

The Loved Ones has fun with its violence and doesn’t shy away from the ridiculous, like when the father-daughter couple throw rocks at Brent to bring him down from a tree he just climbed to escape their crazy selves. The victims are also just stupid enough to remain victims.

Random Trivia:
Gary George, an Australian man who killed his friend, allegedly copied scenes from The Loved Ones while torturing his mate.

this was very fun to watch, thanks :))

Fantastic! thanks for adding this one

This one’s got style

Ooh, I liked that a lot more than I expected

It was pretty damn good, wasn’t it? After watching Prisoners on this site, seeing our protagonist get up out of that underground dungeon was cathartic! And so was that internal symmetry at the close of the film.

Lola’s so beautiful . . . Any man would be lucky to be her boyfriend.

Great film.. definitely worth the watch

Feminist movie of all time. love this

the most disturbing thing i’ve seen on this site is that statement.

one of my favorite movies !!

Yes… yes!!! So glad to finally see this gem on EUM!! truly one of the greats.

I actually liked Sean Byrne’s other movie – The Devil’s Candy – more than this one. and its a short watch too

great movie not to heavy to watch while you are fuckin with other things on your desk …the musical back ground is great ..the dude who is dating the stoner is great …I. give it a thumbs up not to be missed