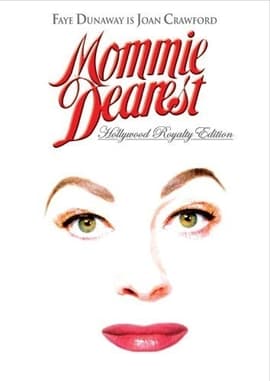 Plot – Spoilers:
Based on the alleged experiences of Joan Crawford’s adopted daughter Christina.

When Christina was adopted, Joan’s career was in its latter half and despite a few flourishes including an Oscar, the stress of a waning career seemed to have worsened her obsessions with order and cleanliness. Christina claims to have bore the brunt of most of this obsessive behavior, though there have been conflicting versions from friends and family that dispute the extent of abuse.

So maybe this film is best watched as a work of non-fiction. A mother who was never able to shake off the belief that she did her daughter a favour by adopting her. A woman who was extremely vain, but also filled with self-loathing – every time something amazing that she craved happened in her life, she had a congenital need to find a way to ruin and fuck it up, with the target often being her slavish daughter. 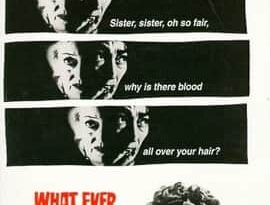 That was incredible. Though I’m curious as to why the small child is being punished for the wire hanger incident. I’m sure she wasn’t the one who went out and bought them. I guess we’ll never know now.

The cover creeps me out, omg that face gives me the chills

The acting is so fucking good damn almost made me wanna cry. Please keep uploading more classics like this.

What a stellar performance given by Faye Dunaway!! Absolutely amazing!! There are moments in this film where she looks so much like Joan Crawford it’s down right scary. I’ve said this before, and I’m quite sure I’ll be saying it again, but there are no actors anywhere in the world that come anywhere near close to matching the talent some of these once-upon-a-time thespians possessed. They had to. There where no special effects and green screens to enhance their performances in anyway. It was all on their shoulders to make a good film a good film. Some certainly excelled while others simply filled a pair of shoes. Now before you get triggered, I’m not saying that the modern day actors lack talent. I’m saying modern day actors lack dimension. For instance, try to imagine Chris Evans as R.P. McMurphy in One Flew Over The Cuckoo’s Nest. Or a Kate Mara as Baby Jane Hudson in Whatever Happened To Baby Jane, (which oddly enough co-stars Joan Crawford and her eyebrows). It’s not that these later-day actors couldn’t pull it off… it’s that the lack the skills to complete the character the way the actors of the past did. In other words, their feet are way to small for that particular pair of Gucci’s. But what do I know? I’m just a brilliant psychiatrist who watches effed-up movies on my days off.

AND, AS ALWAYS, THANK YOU, ADMIN!!! Effed-up, like beauty, is in the eyes of the beholder. I am a fan of the more psychological effed-up side of things, while others seek out a more bodily-fluid orientated environment… and somehow you manage to keep us all reasonable happy. I say reasonably because of the whiny-whiners who bitch just to hear the sound of their own voices.. but they suck anyway, so…… Anyway, you guys do a really great job with this site. (*cute little thumbs-up emote goes here)

Now THAT is a Horror show!
Think that axe scene was thrown in for the fans of Straight Jacket?
Thank you EUM 🙂

I found this kinda odd.. as someone who was adopted, I found my mum acted in much the same manner. Not the extremes Joan went to, but everything always seemed like a competition. I always had to look and be my ultimate best. Weird. I now wonder if that is common in any way for adoptive mothers.

Moral of the story: life’s better without kids

God, this movie really made me nervous af, living with both abusive parents is a real nightmare.

This was a brilliant old movie!

Great film. Anyone who had a lousy mom can relate.

What did I tell you? You just wind these little cry babies up and they spam like crazy. Did your feelings get hurt you gay little cry baby? Awwwww

I fuck my mother,little boys too