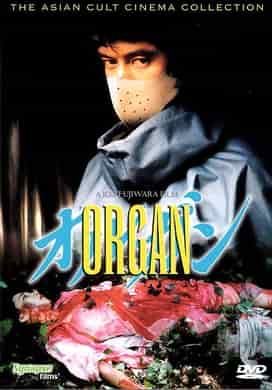 Plot – Spoilers:
A couple of cops, Numata and Tosaka, are on the trail of an organ-trading gang. Yoko, a woman wearing a patch, and a masked Doc appear to be important figures in the gang. When the cops finally burst in on them, in the ensuing fight, Tosaka is captured while Numata escapes. Numata loses his job, becomes an alcoholic, but is obsessed with finding Tosaka. At this point, Organ turns its attention to the Doc who moonlights as a biology teacher at a girls school and is not above violently raping girls who need help with their grades.

Organ chooses style over a cohesive plot. After a while it becomes hard keeping up with what the fuck is going on, especially when several characters are seen in the dark and later emerge in light, looking like completely new characters that were randomly introduced. It also doesn’t help that one of the main characters has a twin.

The WTFery is top-notch though and helps keep you engaged. Like when this larva-woman emerges orgasmically from a pupa and starts pulling out caterpillars from her belly. A plump woman also randomly decides to piss on some newspapers in the corner of her room. Then there’s an amputated man held captive in a cupboard among dense foliage, whom we keep returning to. Being a caterpillar is a common theme here – on one occasion, a tied-up man hops down a subway and then writhes his way into a gutter to hide.

Trivia:
The director Kei Fujiwara is the snake-cock woman from Tetsuo 1.

Just say you thank you very much for your work,man.i searched this for long time.i really appreciate your culture of underground movie.tank soo much man??

Thanks for sharing this awsome master pieaceI