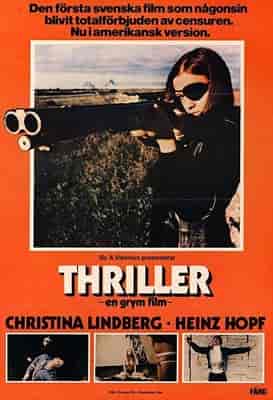 Plot – Spoilers:
A mute woman Madeleine lives on a Swedish dairy farm with her silently caring, old parents. She wasn’t born mute. Rather, the silence in the family was enforced, when as a little girl she was raped by an old man she trusted. A man she trusted enough to playfully curtsy to, before going on a walk with him.

And now years later, she wears the same naivete along with a similar yellowish-orange dress when she agrees to a stranger’s offer for an evening out in town. You can’t really blame her though – the guy is a charming alternative to the cows she regularly spends her time with. This charming guy turns out to be a pimp with a relatively sophisticated clientele. The pimping principle is straightforward – Madeleine is forcibly hooked on to heroin and given the sole option of working with junk to earn her junk.

Christina Lindberg as Madeleine is child-like, not just in her appearance, but especially during her combat training. And this makes her quest for revenge even more entertainingly sinister. As many would notice or know, Thriller: A Cruel Picture served as an important source of inspiration for Tarantino’s Kill Bill. And not just for Elle Driver. Some of the slo-mo death scenes here are comical, but there is enough style in the revenge sequence to offset all of that and make this an exploitation classic banned in Sweden at the time.

Thank you for publishing my request! You guys are the unsung heroes of whatever war is currently on. Love this site x

thank you very much admin 🙂
keep up the good work!

i love you page

Christina Lindberg with the Eye-Patch and the “Horse”, what for a Scene – I love it.
Very Good Page, Gracias Senior 🙂

THANKS FOR THE MOVIE.

… and to think I almost watched Kill List… again.

Wow, in ever sense.

I thought the slo-mo was… dare I say it… ART?

Well it was high class low brow and the violence was the finest cheese I have ever smelt… (sniff… ahhh!)

Thank you yet AGAIN Mr and or Misses Effedupmovies.com for another movie for freaks like us.

Slow sound effects were spot on, slow mo scenes of violence spot on also, for 70’s show great job. I did not want to watch this show due to the era but, glad I did. Thanks again Effed up.c

Awesome revenge movie. I think this is my first Swedish film ever. Good performances and that slow motion remind me of Sam Peckinpah. He made The Wild Bunch and Straw Dogs with its details of gore. Great film, thank you effed up.

THANK YOU SO MUCH FOR THIS MOVIE.

well that was so good.
Thanks so much for this and all the rest of the gold you’re sharing.
Mick S.

Fun fact: the cutting iut of the eye is actually real, done on a cadaver.

This was released in the U.S. under the title “They Call Her One-Eye.” I saw this as a teenager at the Drive-In. Yes, I’m a boomer. What was considered “normal” in the 70s is frowned upon today and ironically, what’s considered “normal” nowadays would’ve been frowned upon then. Regardless, this is a cult favorite of mine. QT likes to “borrow” obscure films for his pastiche filmmaking. Oh, wait, maybe he’d be considered a hip-hop filmmaker. That’s better.

Such a good movie with amazing symbolism & beautiful cinematography. Worth a watch.

What a hideous garbage ????

I see a version of this has popped up with an extra 2 seconds. That might gets some uncut lovers in a lather.

They call her brown eye,did this chick ever wipe her asshole properly? Thanks for the close ups