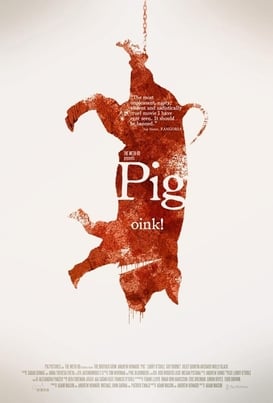 Plot (Spoilers):
Firstly, Pig is a technical marvel – barring the last few minutes, the rest of the movie is filmed like it’s one continuous take. Personally, don’t think this is the case, but it still required fantastic coordination with the actors and does have really long single takes anyway.

The story is a straightforward torture flick. A bloodied woman has escaped from her tormentor and stumbles down a highway. Soon, the tormentor catches up with her and proceeds to butcher her. You soon discover there are other live victims littered around his farm, in the middle of nowhere. He appears to be building a sort of family commune and refers to himself as Daddy while his victims are dressed similarly, like in uniform. These include a pregnant woman he affectionately refers to as ‘retard’, who appears to have been broken and has lost her mind. The others are in different stages of being ‘broken’ – an aspect he cheerily sings about while working on them.

There is a minor twist ending in the sense, he is not what you’ve probably slotted him to be.

You found it!!
Most impressive and many thanks, dude!

If you don’t understand this movie.. you should probably be on another site. .
This is a marvelous piece of work .
It looks fantastic. It sounds fantastic.
It really is a spectacular roller coaster yet it doesn’t really move at all.
The singing and cooking scenes… The meticulous chopping of onions .. it’s just visually and musically great. The soundtrack was a little squeewed on my copy but it didn’t ruin a moment.
Filmed in the UK too I believe ?

Catherine the First
Reply to  SH

Don’t be pretentious. Just because someone thinks a movie is shitty doesn’t mean they “don’t understand” the deep other meaning like you apparently do.

Dan
Reply to  Catherine the First

lol even if it’s true? stop implying stupid people should be handled with kid gloves

Bcm
Reply to  Catherine the First

aww cute the little faggot got his first butthurt awwwhwhwhwhh 😘😘

UK? The landscape would suggest otherwise.

Grow the fuck up.

It really is, not gonna lie.

Looking at the other comments – so that’s the thanks you get for being about the only place to find this movie. I am going to watch it another time but thanks anyway, and thanks for such an awesome site, I have just found it

Wow this movie was REALLYYYYY annoying. It gave me a headache with the moaning and . It’s poorly made and the actors suck. I don’t see what the big deal is.
Looks like an art film rejects failed project.

Wtf did i just watch dont get the ending at all. Movie should be called the day and life of a retard!!! it is hard to watch him beat the shit out the woman in the beginning

Wow, hard to find film. This site is freaking awesome. Keep up the great work effedupmovies! * This was a far better watch than I expected. Not sure how above commenters found it boring, poorly made or poorly acted. I thought it was pretty genius. The way it is filmed, seemingly continuous, and the insane music score kept me locked in. Yes, it is brutal, but I didn’t find it one dimensional like MSP or those ridiculous August movies. If you do not understand the ending then you obviously were not paying attention. So many little things add up to it. Cheers!

Sorry if poor english this film stinks like nigger!

I wonder why your English is poor.

In the first ten minutes it looked like it was going to be really stupid. Its basically a home video as far as film quality goes. But I started getting into it slowly but surely and really liked the flow. Its really funny and then suddenly super messed up, then back to being funny (lighthearted even, dare I say) seamlessly, which I really appreciated. Some of the disappointment people had with it may come from an expectation that it was going to be a dark, gore-y plunge into the depths of wanton human depravity. But instead it was a twisted romantic comedy with surges of messed up things throughout. There were no puzzle pieces to put together about the ending, it was pretty self explanatory. An interesting way to finish it. I quite liked the movie overall.

too bad that the quality is botched. audio is out of sync and very pixelated

Its almost like Jeff Epstein went to the outback and became a cannibalistic cross dressing murdering rapist without the children. This movie is so true to life it’s scary . For example, Rich politicians, Lawyers, and judges have secret lives like Ted Bundy but, the cops help hide it. Just a thought. Great job EUM. Thanks

This movie is not for the faint of heart! It really gives a disturbing, disturbing aspect into what the director is trying to convey. I live for movies like this because it portrays the sadistic actions that people are capable of doing to another human being. From the very beginning, I especially liked how “daddy” was just so un-remorseful and downright barbaric. If you are a “horror afficinado”, I highly recommend this movie because there is nothing like it to compare it to. Thank you effedupmovies for allowing individuals like myself to see this film that cannot be found . Anywhere.

Been looking for this movie forever, thanks for posting

now whats with some of u who uses the n word fuck off wil you ?

Shut the fuck up, Mudshark. If anyone wanted any shit outta you they’d squeeze you head.

Go smoke a dick, soy-boi…. repugnant virtual signaling excuse for a human being.

Really enjoyed this! I was leery going into it after reading the comments, but I was definitely worth the time.

I don’t know whether this movie is complete garbage or an absolute genius work of art.

First off, it says so much without really saying anything.

The whole “one-take” method does a phenomenal job of capturing the madness of a methamphetamine-fueled psychotic episode/rage/binge, which apparently our protagonist frequently indulges in. More then likely to relieve stress and escape the pressures of being a successful business man and a well-rounded family type guy. Why do I say that, you might be asking? Well, he DOES own a plane, multiple properties (I believe) and nice clothes. This is what I mean by saying a lot without really saying much of anything.

Perhaps he’s a meth cook, a manufacturer, which is highly possible from the bottles “ingredients” spotted around the property. And look how nicely he cleans up, washing off the meth-drenched psychotic hillbilly and transforming into a presentable, respectable, contributing member of society. Where the wonderful, attentive, loving and providing father meets the evil, meth-smoking sadistic psycho-Daddy.

Second of all… the tunage is pretty rockin’. So there’s that.

Please. Get that soundtrack out of my head!
That movie grows on you.
Adam Mason is underrated.
The ending alone, justifies the movie.
Thank you webplace x

Some people are SO amazing at showing gratitude. lol
About to sit down and watch this. Maybe I’ll like it, maybe I won’t. I DO appreciate that I CAN watch it here though.
Thanks much. 🙂

Wow! Such an amazing movie! Great twisted ending…didn’t see that coming!
Been searching a long time for this movie! Thanx EUM!

Interesting film. The ending was not what I was expecting. Idk how to feel about this film though it’s kinda confusing but I guess its meant to be

Thank you so much for this upload!

This is an interesting movie for someone who loves film as the one-take is pretty awesome. The first 20 minutes are fantastic. Later on, I could feel the movie was improvised and particularly the actions from the girl in chains feels so unrealistic. She’s just crawling around and repeating herself, not really wanting to get out, just acting. But the special effects are soooo good for this one-take film (it’s actually not really one take, but almost) and the camera movements are dope. But it’s also shit, haha. Repetitive music and sometimes you could really see the acting being improvised. But I really enjoyed it anyway and I would recommend it as an interesting study in film making if you’re into analyzing about what happens behind the camera. I recommend it for film lovers who doesn’t mind watching shitty movies sometimes, and gore lovers would absolutely be satisfied.

Yawn. I can see why he didn’t want the movie to be released.

This was so fucking FUNNY to watch, but i said in a good way. A planned shitty movie, and it works, and the gore scenes are cool too so…. So much chaos but i honestly like this thing. Also, the fact that this movie have at least 15 minutes scenes without cuts its kinda crazy.

utterly boring and meaningless don’t waste your time on this pussy shit
the chick running from the dude at the beginning was hella stupid.instead of running somewhere on the grass,she was running down the street .obviously he was gonna catch the hoe,since she ain’t faster than a god damn car.the guy on the radio gave some good advice

Does anyone know how to find the “I’m gonna break you down” song online?

Wow !! for what it is……it grabbed me, pulled me in, didn’t let go. Simple, basic, barley has a plot. Great movie, done with so little.

Fantastic movie, original story, watch it , don’t worry about all the other pretentious “critics”,

Not sure shaky billl would have approved being quoted (Hamlet mainly). Technically the film is very clever even if sometimes the blocking and scripting is a bit obvious. The ending is poor but the whole third act was lost for any vinegar strokes (just could not get it up). However the fact it was filmed in the UK (Cambridge) is very clever unless the credits were a piss take.
I would not bother watching again unless they re-did the soundtrack using Hawkwind because that would have made it more trippy. However for a one-off view its worthy.

For those who liked the technical aspect of Pig I would recomend a Japanese film: One Cut of the Dead. Its a comedy horror and not really fucked up enough for here. However still a good watch.