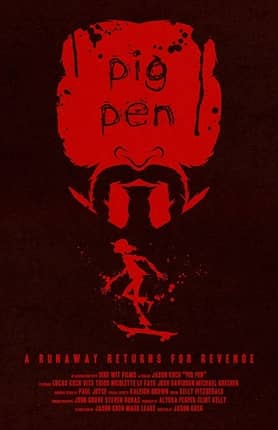 Plot – Spoilers:
Zack has recently dropped out of school. He spends his days wandering on his skateboard, trying to stay away from home and his mother’s abusive boyfriend Wayne. But when Wayne gives him an ultimatum that he can return home only with 50 bucks, even if it means pimping himself out, Zack is forced to make the shittier outdoors his temp home. The streets introduce him to all sorts of unsavory characters whom he handles with a trademark deadpan look.

Pig Pen lulls you into expecting a meandering jumble from it, but instead surprises by springing some nice gore-action every now and then.

YYEEEESSSS! THANK U SO MUCH ADMINS!! Humbling u actually listen to requests;)

So I had recommended this movie roughly two months ago for this excellent site, because I thought it’d be a *perfect* fit. I’ve owned the Blu Ray for a while now, viewed it multiple times, but feel it’s a crime how few ppl have seen/heard of this film, hence why I recommend it. Deserves to be seen.

The degree of nihilism and pure grit this movie has astounds me, gut-punch status. U think watching the first few minutes that the initial indie low-budget feel will lead to a mediocre movie, but it ends up adding a gritty hopelessness and realism lost on many films in this ‘effed’ up genre, imo. The second Wayne the bf walks in the house right in the beginning made me realize this movie was gonna be fucked, I dunno why, just gave me that vibe, and quick.

Excellent plot, characters u feel for and end up caring about, or lack thereof (main kid Zach u felt sorry for, POS mom u hated, and having known quite a few oxy junkies her portrayal of one was damn near spot on, Wayne the boyfriend was just plain scary, etc) and an engaging film the way it plays out, never a dull moment or a wasted / forced scene.

I REALLY HOPE U ALL LIKE THIS FILM:) It’s easily one of my all-time favorites, easily. I give it a 10/10 all day, a standing ovation.

And love it or hate it, I fucking guarantee that the ‘hand scene’ will stay with ya for a while. Thanks

Good lord. I’m tempted to use words like “Art” and “Acting” to describe this truly horrific film.

All the actors were great, but Vito Trigo as Wayne offered a terrifying portrait of a man wrecked by abuse and so full of pain and that his only course is to ritualistically deliver pain unto others. It’s an easy roll to overact and turn into a cliche bad guy but Vito lets real evil shine through the banal face of an abusive asshole boyfriend.

I’m reminded of Frank in Lynch’s Blue Velvet. Frank’s control of others springs from pure hate and self loathing. He has the power to make others hate themselves and feel like they deserve to be shit on. His gang of hangers on hate and fear Frank. It’s a tactic that despots large and small have used for years.

Honestly though, Koch’s mesmerizing tour of everyday hell is infinitely more brutal and real than Lynch’s trademark fantasy style. His ability to keep the acting and action to a low boil and not over do either makes for a dark journey straight down to the darkest parts of the human condition.

Very glad you liked it! Like I said above, this one deserves to be seen, much moreso than others. It’s films like this in the ‘effed’ up category that prove there can still be perfect examples of the genre on rare occasions, imo. I too agree that Vito Trigo was epic as the role of Wayne in this film, a tour-de-force of an actor, so much so that I’m making it a point to see the other films he’s in as well.

Since u enjoyed this film, I’m pretty damn sure you’ll like this directors other film, titled 7th Day. I own both, lol. Imo not as powerful as Pig Pen, per se, but still great, effed up, and has Jason M. Koch’s (what I assume to be) trademark gritty and raw nihilism, as well as quite a few of the same actors from this film, albeit not Vito tho. Am anxiously awaiting the directors new film as well, but like with so many others, release was pushed back due to the Coronavirus pandemic. Thanks for ur thoughts tho, am very happy others are liking this as well!

Not really worth it. Only good thing was the gore. Other than that it’s a bit slow

Damn, this one will stick with me for a while I think. Although it’s filled with amateurish technical problems, terrible acting and a few rough edges in the storytelling here and there – not to mention an ending that just makes you roll your eyes – it’s an overall surprisingly enjoyable experience if you’re looking for a grimy, atmospheric and brutal film. A bit of polish here and there and this could have been a proper good film, but it’s nothing that makes it unwatchable or a waste of time.

What a brutal and gritty film. Great performance by the boyfriend, he just exudes evil. The ending was not what I was expecting. Overall, a great movie not easily forgotten. Cheers EUM.

this is definitely gonna stick with me for a while, neat movie

Not posting this as a request just enjoy Jason’s work on this movie have come back to watch and show multiple times as well as having bought the movie itself afterwards but can’t help but notice there isn’t a hook up for 7th day big frown haven’t got to see that one yet, like i said not really a request more like admiring the direction of Jason (:

CRAP MOVIE MADE FOR KIDS

A brutal, gritty, nihilistic indie film that delivers. The boyfriend Wayne is one sadistic f’d-up piece of street trash. A memorable character and a great little dark film. 4/5 oxycodone

Watched this a long time ago and just viewed it again for the 2nd time. Really great gore movie that has a good plot and the total ambiance really is the perfect fit. Definitely 10/10 ⭐’s