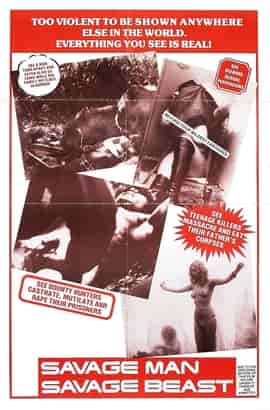 Plot – Spoilers:
Mostly animals being hunted or dying slomo heroic deaths, often to the accompaniment of epic music. Also, animals being violent to each other and to man (the staged Pit Dernitz incident). And man being violent to man (scalping and beheading of an indigenous man – also alleged to be staged). There are brief diversions such as scenes of virile men fucking mother earth, an Isle of Wight lady exposing her tits to cover her face when she discovers she’s being recorded taking a shit.

In the end, the title of the film is what it’s possibly about – Savage Man and Savage Beast, and the hypocrisies of looking at either, any differently.

This is the first in what has since come to be known as the Savage Trilogy.

too tame and too much fake shit!!!

You need a girlfriend and a job. This is just sad you have the time to copy paste the same comment on every film. I actually feel bad for you because you thought this didn’t make you look sad.