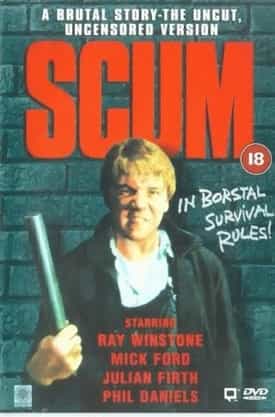 Plot – Spoilers:
Three teenagers arrive at a notorious borstal run by a rabidly Christian Governor and his nasty staff. One of the teens Carlin gets special attention from the wardens as he was sent there for assaulting a warden at his previous borstal.

Carlin soon has to fight established gangs whose leaders see him as a threat to their Daddy status. There’s also the constant threat of violence from the brutal and sadistic wardens. He makes a friend in Archer, whose sole goal is to piss the authorities off while walking the fine edges of the rule books.

Scum is a grim portrayal of the flawed youth detention system in Britain and wasn’t allowed to be broadcast on television for several years.

Well there’s my last shred of optimism and goodwill towards human establishments gone down the toilet.

Another gem from the mostly unknown. Great job, guys….

yeah… another great film here on effedup. not thrilled with the end. I’m thinking how is this going to end, and then that was the end… leaves it up to your imagination I guess. still a powerful movie, especially given the year. I loved it, and thanks alot for the subtitles, us hard of hearing need them to enjoy the movie.

I had never heard of this film before watching it. Excellent performances all around. This juvenile detention center theme preceded Sean Penn’s star -vehicle “Bad Boys” (the one without Will Smith) by three years.