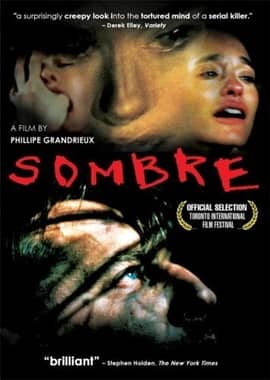 Plot – Spoilers:
Sombre is only for when you fancy a surreal serial-killer film.

Jean follows the Tour de France and along the way, murders and dumps women, mostly prostitutes, in the vast emptiness that France appears to offer. At some point you wonder, who are all these women who are willing to take long drives in silence with him?

Ever get the feeling, my life is a blur right now? That’s pretty much Jean’s current phase. The first twenty-odd minutes of the film are a blurry, almost metaphorical sketch of his routine, where everything’s a blur. Pick up hookers. Kill them. Suffer the dissatisfaction that follows because it wasn’t clear enough to form a memory. Move on to the next one.

And then Jean sees rain-drenched Claire parked in her broken-down car. She doesn’t seem to fear him and has a certain respectability that makes him vulnerable. She’s not a whore and might even be a virgin. He can’t kill such a woman.

Claire’s sister joins them and seduces the violence out of him, but Claire doesn’t seem to mind, so long as her sister is safe.

Damn you guys read my mind, I really wanted to watch this, thanks.
I watched about 40 mins so far and the cinematography and mood is beautiful, the title fits perfectly

how does anyone enjoy this. shaky blurry camera, seizure dance scenes and a chick willingly losing her virginity to a beat up buttfuck ugly prostitute serial killer on the side of the road just after he practicly kidnaps her and ties up her friend or sister or whoever the fuck she was. none of any of this made any sence. even the most rediculous unrealistic movies still follow some form of logic this was just some random asshole shitting on my tv pretending to be artistic.

How did any of you enjoy this… This movie made no fucking sense whatsoever and I completely wasted my time. Anyone that claims that this movie is anywhere near enjoyable either has mental issues or says it just to be different or appear edgy.

This was truly terrible.. I mean like shockingly bad…

The story was turd… The predicaments terrible. The execution pace and artistic merit … Awful.