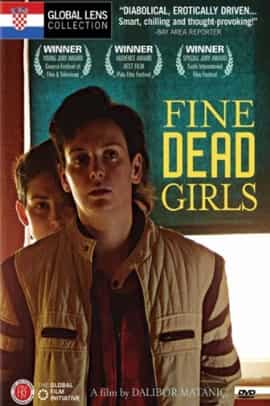 Plot – Spoilers:
A couple of lesbian lovers, Iva and Marija move into an apartment dominated by an old lady Olga and her submissive husband and useless son Daniel. Olga doesn’t suspect they’re lesbians and has plans for Iva and Daniel who himself fancies his chances. Meanwhile, Marija’s dad is convinced her lesbianism is an infection she caught from Iva and hires a prostitute to seduce Iva away from Marija.

The town where all this action takes place is a post-war Croatian shithole where life is static and the future bleak. Fine Dead Girls was one of the most appreciated, yet controversial films to emerge from the post-war Yugoslav region until A Serbian Film, a decade later.

Literally everyone was shit except the main girl who nobody would let study. I didn’t even feel bad for her possessive GF.

The timing and connections within the story was impressive, never felt forced. The topics explored were in your face but again not forced/cheesified. The characters were amazing. Somehow this movie was entertainingly fucked up and hilarious at the same time. Im glad I didnt give up a few mins into it and actually finished it. Ended up enjoying it!

Just do it
Reply to  Jilly

Is it possible to download movies on these site? It’s buffering a lot

dilweed
Reply to  Just do it

Dude, no. Have some appreciation for this site’s existence and go stream elsewhere. If it’s buffering, refresh the page or fix your damned proxy. Alternatively;
Close other applications and programs. …
Pause the stream for a few moments. …
Reduce video quality. …
Speed up your internet connection. …
Remove other devices connected to your network. …
Update graphics card drivers. …
Try a wired Ethernet connection. …
Clean up your browser settings.

Yeah, you tell him. Didnt know being a computer expert was one of your many talents. Zedx.

shut up zeddy,go cool off your damn balls

They just asked! There’s absolutely no need to be such a bitch!

Thx, Josh. I think she likes me. She has been following my comments before. Dont know whether I should be flattered or annoyed.

You have to understand… this is as good as it gets for Zed-Boi. I told him a week ago he thinks this is his own own personal social media site… He’s here every day… all day. He obviously had no life, no job, and no hope. So, this is as good as it gets for ol’ Zed-Boi. You gotta figure there’s something seriously wrong with this guy. He’s either mentally ill, physically deformed, or the type of person who is the subject of a few of these films. Pitiful, isn’t he?

Seriously, dude, u dont give up do ya. U must have a hard on for me or something, stalking all my comments and u say this is my personal social media site. Look in the mirror, buddy, u will see a pathetic man looking for recognition and trying to fit in somewhere like this site. U obviously have no friends and are constantly aggressive towards other ppl to boost ur ego. I feel sorry for u as u were probably abused and assfucked by a family member as a child. As far as being mentally ill or deformed as u say, ur reaching for straws to be offensive but I forgive u, seeing as u have a lot of problems. And I do have a job btw, I am a police officer in Australia, shame Im not in the US, if I was Id have u committed to a psychiatric institution. cause u need some serious help. Now stop stalking me and go get a life. BYE BYE, Jose.

Australia sure does scrap the bottom of the barrel for their law enforcement officers because you’re the biggest idiot on here. And as far as stalking – dude you’re everywhere on here. Give it a rest. Go outside and make contact with an actual human.

I knew some incel would arc up and here u are. Did not ask for ur opinion so stfu and mind ur own business. Insults from someone calling themselves ”GoreWhore” makes me lol, ur obviously unstable having such a tough name to hide behind. U say I am everywhere on this site, well, so are lots of other ppl including u. And, as far as making contact with humans, I get plenty, locking up degenerates and scum of society eg, pedos and rapists and mentals many of who sound like ppl commenting on here. Also, aussie police have a code of conduct unlike their US counterparts, who shoot unarmed ppl at their leisure and face no consequences. U Americans have a lot to answer for.

zed man actually speaking facts the US police force sucks and is retarded as shit.

Why do you always type as if you were a bot?

Great movie. My first Croatian film. I find that foreign films are mostly a lot more raw and realistic than American film. Even effed up American film.

I get more entertainment reading all the Fighting/Arguments btw all the members than the movies……. I’d like to award thee best instigators posting on this site; 1st Place Zed Man……. 2nd Dr, Lector ‘’most intellectually involved’…….. 2nd Matisse ‘’No Nonsense Radical Lady’’ don’t mess with Gal’’………… 3rd Atheist Robot’’ has a good attitude’’………..Ruby Rain ‘’says what she means’’…………4th Gorewhore’’ Excellent Title’’ gets to the point…….. 5th Josh’’ Be polite members’’………..6th Bad movie Joe ‘’ Tells it like it is, good posts’’……………TheStoneRanger’’ that’s a million dollar ticket’’ keep posting’’……………… To be continued ‘’As Posts Go By’’……………Peace/Destruction

A great one, thoroughly enjoyed it. The male antagonist is a very talented actor, he really made his character obnoxious…and “hello, familiar faces” in the comment section.

Is Daniel the same guy who played the cop/brother in Serbian Film?

A grim little slice of life in a shithole of a Croatian town. Interesting characters and a plot which is both filmed and acted well. Holds your attention, a competent 4/5 box cars