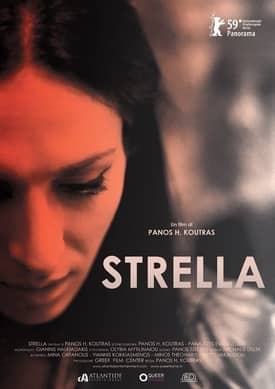 Plot – Spoilers:
After 14 years doing time for beating someone to death, Yorgos has been released into a Greece he feels disconnected from. He has no family left. His son Leonidas was a kid at the time of his incarceration and has not been in touch since. And his house is rotting away back in his village.

After sampling the emptiness of Athens, Yorgos feels it’s the right place to drop anchor in. He decides to sever the dark past associated with his village, sell his property, and move to Athens. His decision is partly influenced by an attractive transsexual prostitute he fucked in his hotelroom and with whom he feels the possibility of a relationship.

Strella is a beautiful moving story that makes it hard to apportion blame to either of the suffering characters. It’s debatable whether Strella was completely unaware of what exactly she wanted from Yorgos.

She has clearly been living with the memory of being in love with an uncle who was taken away by force. The uncle’s murder wasn’t just about punishing a pedophile. There appears to have been an element of a father in denial of his son’s sexuality.

So what better way to punish the man responsible for all the mess in her life than by having him fuck her now.

Thx for adding a recommendation of mine, for maybe the best Greek film of last 20 years. hope y’all enjoy!!!

i hate this movie because it is tv tier degenerate cringe, have seen it before ofc on tv but not subbed. i’m hoping for more funny, crazy/whacky shit like animal soup to get uploaded

Loved this film. Surprising softness despite the hard edges.
Not sure what was up with the squirrel.

Fascinating and bizarre. 5 star film. Excellent acting and very well made. I’m going to watch it again. I would have never known about this movie if it wasn’t for EUM. Thank you EUM. You’re the best!

Sort of off topic:
A question for all you straight guys. If you were forced at gunpoint to fuck a transsexual and you only had 2 choices, Strella or Michelle Obama, who would you choose? (I’d pick Strella – much more feminine looking).