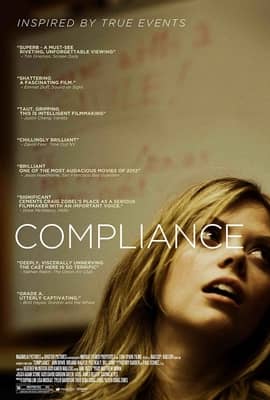 Plot – Spoilers:
It’s a busy day at a fastfood joint. Middle-aged manager Sandra has to juggle grave issues like an unexpected shortage in pickles and bacon, the freezer being open overnight, a secret shopper and snide remarks about her mid-life wedding among younger employees. But despite all this, Sandra potters about, handling all of it with a quiet efficiency that suggests she just might triumph over the day.

Then a police offer calls informing her that Becky, a blonde attractive girl working the counter has just been accused of stealing and Sandra will have to strip-search her.

As the hours roll on, so do the demands of the officer, as he mixes compliments with castigations over Sandra’s performance as the on-site law enforcer.

Compliance would seem like a ludicrous story that’s elevated only through a great performance by Ann Dowd (Sandra). That is, if you didn’t realize this actually happened at a McDonald’s outlet. And had been preceded by seventy similar incidents over a decade.

Was Sandra through a lifetime of accepting authority merely playing the corporate sheep. Or was there an element of vindictiveness towards her younger worker quietly buried inside her that shut out logic and incredulity. Sandra’s fiancé was probably less about obeying authority and more about: Here’s an opportunity. And the law is allowing me to go for it.

Also, the fact that the prank was successful so many times urges you to rethink – This would never happen to me.

After a lawsuit and several appeals, Louise Ogborn eventually settled for roughly 1 million USD from McDonald’s. Donna Summers was initially also awarded over a million dollars by the courts, though the eventual decision seems unclear. David Stewart was acquitted of all charges, but the calls stopped.

one of the most boring goddamn movies i’ve ever watched

Don’t know what the person above is talking about. I found it excellent and very interesting. I hated that goddamn manager with her fat dumb ass.

Well, really it wasn’t the actual actress that was involved in something like that but who she was portraying lol

Absolutely amazing what humans will do when spoken to in a way they enjoy. Great film guys.

Fucking mental…it is all true, almost to the letter, it is all online including interviews with the young girl and the manager.

And the director is same guy who did last years excellent The Hunt – clearly some talent there…..

Oddly enough, my wife and I just watch this movie 3 days ago… and we both remember when this shit was going down. I know McDonald’s had to pay out the ass in the long run because they had been warned about it but did nothing to advise their franchisors to the fact.

This film is a fine demonstration of how gullible some people are. You can basically tell them anything on the phone, and they’ll believe it. It shows how and why telemarketing scams continue to flourish even though the public has been warned about them for decades.

And is it just me or is that manager one of the most unlikable people walking the planet?

Get this one..My mum is 92 yrs old and I came back up ‘ home’ having left decades ago & I lived in the South coast of the UK & moved in with mum for a while whilst she got over my dad’s death.
There was no broadband server in her house so I had to use a public B T server ( dodgy) for a few months & one day I found her getting upset with th I Indian call centre guy telling her she had been ‘ hacked’ & they were about to terminate her phone contract…I went on the phone & called him a f**king scammer & I was ringing the police..Soon as I.put the phone down my mum received 37 phone calls from screaming British people asking why we wanted their bank details & why were we saying ‘ WE’D HACKED THEM’ !! My elderly mum was crying & after explaining to about 8 of these callers that WE had just been duped & we were just in a normal house in Cheshire & not hackers.
Mum’s phone company said it’s a known trick that these scammers use the last number they dialled as THEIR OWN NUMBER so basically the last number on called ID they ‘ hijack’ the number so the poor person gets inundated with threats off understandably upset people .
Within I had to change my mum’s telephone number she’d had since the 80′ s & phone everyone from her Dr to the undertaker who was arranging my dad’s funeral.She’s 92 & the stress was horrendous the same week as dad’s death .

good joke – my wife and I – had to laugh

I knew this movie would make it’s way on this site eventually.
I watched it years ago.
More often than not, someone else will suffer due to one’s stupidity or gullibility.

I also viewed this some time ago, I cannot recollect where… Facilely persuasive and accosting.

I thought ( I ‘ m from the UK) that Americans were supposed to be ‘ ballsy ‘ oppinionated and question authority??!
HOW on earth did this even take place in the first place without them ringing the local.police station to verify that there was a so called investigation & as soon as they tell her to take her clothes off ….they are committing an assault? Why didn’t the manager insist that someone from head office r her manager come down for them to deal with it? Why didn’t it occurs to them to ring her mother to come down to the restaurant to support her teenage daughter ?.
First time I heard about this yesterday as it wasn’t reported over here & all she got was about £500.000 compensation & the rapist drunk of a fiance got just 5 yrs in jail .If this had have occurred in the UK BELIEVE ME the restaurant would have been fire bomber the next day .
Very good performances & I couldn’t believe how much the actress playing Beckie reminded me of a young Christina Ricci! Not sure how well it’s been reported in the US but we had a young woman abducted ,murdered & dumped in the woods in builder’s sack last week …it was done by a firearms COP( we don’t carry guns here) & this bastard had actually guarded our old Prime ?my sister Theresa May !!
Any wonder women are now properly fighting back at long last ,no man would ever stand for what we go through ..Just glad to be 53 ,the harassment in my younger days was simply unbearable ,getting older is good .

It’s always that one person to turn something into a discussion about Americans. You do realize humans are complex, yes? No matter where they’re from. Use common sense before asking stupid questions. And I doubt the place would have been “fire bombed” the next day.

I know this story and saw a documentary on it back in the early 00s. I don’t know how they made such a wild story so boring. Dude called from across state lines from a calling card, have a 40 year old man strip search a 16 year old girl, made them sit the girl in the nude in the office for hours, over a stolen cell phone. And they followed every order by a voice that said “I’m like tots a cop bro”. The manager and her boyfriend ended up going to prison for this. They never found the caller.

My sloppy running sentence was more interesting than this movie.

This is the Milgram experiment in psychology… Look it up for the details. It proves however, that if any person is given the cues from authority they will do unspeakable acts to another human being.

boring ass movie, but hey at least the chick was hot.

Do this is where Law&Order SVU got the episode with Robin Williams starring as a creep. Robin’s character (detective milgram) did this exact thing, called burger joints coercing managers to tie up and strip search employees. He called them all sheep because they simply followed orders blindly.

How are people this fucking stupid? Girl should’ve also said screw you, I’m leaving, I quit! How she was able to comply to the stripping, not to mention spank and blowie is beyond me…

only in the us people are this stupid…

Here’s the actual Situation, they got it down to a T.
https://www.youtube.com/watch?v=E8PbmuJ8m-c&t=318s

Total garbage. Had to force myself to get halfway before giving up.