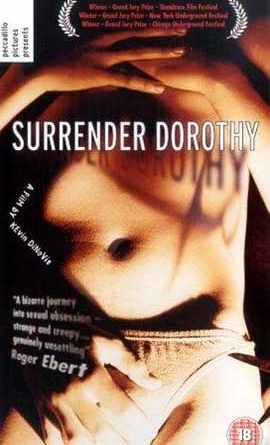 Plot – Spoilers:
Trevor is an overworked and underpaid waiter with a fear of women. Though he gets off to the forks used by women frequenting his restaurant, their presence overwhelms and intimidates him. Into this dreary existence drops in an old buddy of his, Lahn. Lahn is a junkie and slacker on the run from a dealer he was shacking with.

Initially Lahn is able to throw around his entitled victimhood and lounge around but soon enough, Trevor begins to exert his dominance. After being ordered around for months at the restaurant, this new found power begins to grow on Trevor. He protects Lahn from the dealer but at a price. In exchange for dope, Lahn is slowly forced to take on a new identity, that of Dorothy – a waitress at the restaurant. What begins with Lahn wearing Dorothy’s apron while room-cleaning, soon morphs into something more strange and sexual as Trevor begins to increasingly see him as his Dorothy.

Favourite Scenes:
1. This is more like during a 2nd watch. When you initially watch Lahn lazily sitting around at Trevor’s place, it’s kind of funny knowing the fate that is about to befall him.

Surrender Dorothy is deeper than just a movie about a closet homosexual. Trevor seems to actually adore women. But he has a kink of seeing women through objects he can control. So he finds sexuality in the forks women eat with – the first time Trevor is attracted to Lahn, he is turned on by his ear rings. Lahn’s feminine build, his dependence on Trevor and eventual submission makes it easier for Trevor to see him as Dorothy.

From Trevor’s POV, here is someone he already knows and doesn’t have to awkwardly date. He is fairly comfortable with Lahn and feels a certain power to act with him as he wills and chooses. It’s the ideal scenario to manufacture his perfect little bitch.

This movie was surprising !!
I really loved Trevor/Lahn’s relationship through the movie, just so weird >:^D
I don’t really know if I have a favorite scene, but the movie is real funny and I wasn’t expecting how it turned to be.
Favorite character had to be Trevor, thought he’s kind of weirdo.
Yeah, sure, it’s filmed in black & white, but it’s still a great movie to watch.
Will probably watch it again, recommend !! >:^]

Does it make me a homosexual if i get sexually turned on by this?!

Most evil and demented psycho I ever saw in a movie. Looked like matt hand cock…Terrible ending. Should have ended with the psycho getting fed feet first through a meat grinder.

just needed a good ending – they obviously couldnt think of one

why is this so hot

lmao, its a fine movie but not that disturbing. saw this on a disturbing movie tier list and I got to say it could be either on 1st or 2nd tier not any more below than those. it was on 3rd i think. anyways, it was interesting