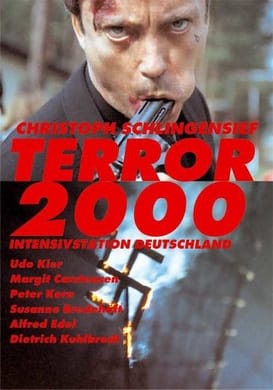 Plot – Spoilers:
Another from Christoph Schlingensief’s Germany Trilogy, Terror 2000 is an absurd, loud take on the reaction of some Germans to reunification and the flood of immigrants. Made in 1992, it feels very current with all the debates in recent years on immigration. In one instance, Udo Kier – who plays a priest constantly fellating a gun – exclaims, “Germany is not America. We are not a country of immigration.”

The narrative is not regular, but more WTF and more WTF and can be hard to keep up with. The bare semblance of a plot is about an immigrant Polish family escorted by a social worker, who are attacked and abducted by a group of Neo-Nazis. The Chief Inspector and his partner set out to investigate.

Terror 2000 doesn’t really take sides while dealing with the three groups – the Neo-Nazis, immigrants and liberals. In fact, the Inspector appears to have some interest in the Nazis which he tries to explain away to his partner as a method to infiltrate them. But this seems a shallow excuse, given the ending.

Not sure if German Neo-Nazis had this tradition back in the ’90s, but there is a nod to the KKK here, with a burning Swastika. 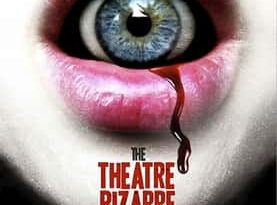 This was great directing and acting, “This is America”, they saw its future and past. Thanks EUM.