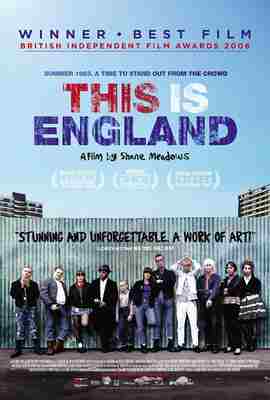 Plot – Spoilers:
Set in early ’80s England, it’s the end of the term and twelve-year-old Shaun is missing his dad who died in the Falklands War. Shaun’s having a rough time at school and falls in with a group of skinheads who indulge his boyishness. Around this time, politics has started to seep into the skinhead subculture and the group is introduced to this when an old friend, Combo, returns from jail, simmering with ideas and an urge to lash out. In Combo, Shaun finds a father-figure and finally a place in the world.

This Is England doesn’t try to tell a broad historical story about skinheads or racism but is simply a story about a bunch of people in a small town, somewhere in England. It does however raise an effective point during its final act about how racism sometimes can just be about resentment and finding an excuse to hate and act on that hate in a justifiable way. 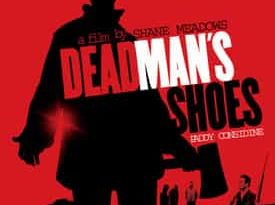 Brilliant movie. Really puts a strong psychological insight into how an abused young boy like Shaun finds solace in becoming part of a somewhat-harmless but fun-loving gang of skinheads, then onto becoming a full-fledged skinhead who advocates racial abuse thanks to Combo who is another member of the gang but just got out of prison. Near the end, you will see just why Combo is the way he is – his true colors comes out. I found it quite sad. The miniseries taking place in 86, 88, and 90 are definitely worth a watch too. It’s amazing to see how the characters’ lives drifts apart, facing a lot of turmoil but finding redemption in many ways.

I absolutely love this movie and the TV show

I watched ..Rude Boy.. (1980) the other day which is an odd film set in similar times to ..This is England… . You would however have to put up with an excessive amount of The Clash so soundtrack wise Shane does a much better job.

England is shit this movie is proof

Dear Admin(s),
It must be because I am an old man, but for a long time now, I am fed up with the kind of discussions going on here: ‘ French are sick incestuous [sic) bastards sister fucks brotber [sic] everyone is fucking each other’, ‘Fuck you Fred fat, you bloated tosser’, just to give two recent examples. Now, I can imagine that it is a difficult decision to block certain reactions, given that many of the movies on your site were forbidden in the past. Yet, it seems you to have decided to do something about the childish behavior, for the recent proof of literary brilliance ‘Nobody cares you fuckin fat cunt, get back down the basement, lardass’ is found under ‘Recent Comments’ but NOT below the pertinent movie (‘This is England’). Well done, Admins! Those who have a problem with this censorship: please feel free to put your reactions on Twitter, while it still exists.

Here’s the news, you pre teen little faggot assholes, and you better listen carefully. This comment section has turned in to stupid fuck land ever since you little pre teen pussies have started writing your moronic comments. Obviously the future doesn’t look too bright with moronic fucking pussies like you heading in to adulthood. Nobody wants to hear your cry baby whining. You are the biggest bunch of pussies and someday soon hopefully someone will do you a favor and beat the shit out of you. That would be the kind thing to do for you so you can grow up and not be a fucking little pussy your whole life. Ha ha, you bitchy little fucking pussies. Chew on that for a while you little faggots. Ha ha. Watch. All the gay little pussies are all wound up because the truth hurts. Watch them bitch, whine and spam all day just like the little pussies we all know they are. Ha ha.

Boring & not effed up at all

@bies Actually, we’re not censoring. What we did is hide replies to a parent comment until you click on View Replies. This way, users can be spared the to-and-fros by looking at the parent comment and deciding if they want to read the replies to it.

Maybe I’ll just remove the Recent Comments thing. Those who want to read the comments can just scroll and indulge themselves. Lemme think about it and make the change later today with a couple new posts.