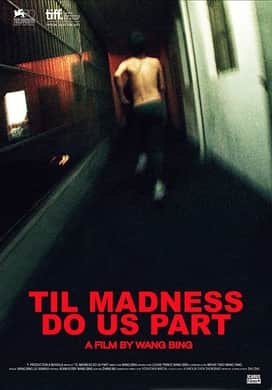 Plot – Spoilers:
A 4-hour documentary filmed in a Chinese mental institution. Director Wang Bing restricts himself to its top floor, housing the male inmates, though there are a couple of breaks including one where he follows an inmate’s return home.

As a viewer, we are aware of the camera exploiting the inmate’s days. And all sorts of questions will pop up – how did the makers get the inmates to not interact with them or the camera despite the patients constantly being aware of their presence. Discarded footage notwithstanding.

Wang Bing’s mastery is such that, after a while, he becomes inanimate and you slowly start to see only a camera following them. And if you immerse yourself further, even that melts away.

Scenes where the inmates interact with family are poignant, while there are others that are unwittingly darkly humourous. ‘Til Madness Do Us Part will either seem a purposeless, boring exercise or rank among the greatest things you have ever watched. It helps if you have a bit of a voyeur, or some mad, or know someone who’s ill.

Deepest thanks for the new movie admins, for I most likely would’ve never heard of it otherwise. Ironic in that a documentary with zero violence would end up being the best film thus far on your site, imo.

A triumph of the Direct Cinema style capturing the essence of the human condition. The inmates peace, sympathy, understanding, and goodwill towards one another shine through the truly abysmal setting, where you’d think there’d be none, ever. My simple words cannot give justice to this profound film, so I won’t try. A solid 10/10

Spoiler alert: Gratuitous amounts of standing up on cots. By the time the film’s over, you could almost swear half the scenes involved standing up on a cot in one way or another.

This was heartbreaking, the conditions and overcrowding are a cruel reality in overpopulated countries.

Have to be mentally retarded yourself to sit through 4 hours of this crap.