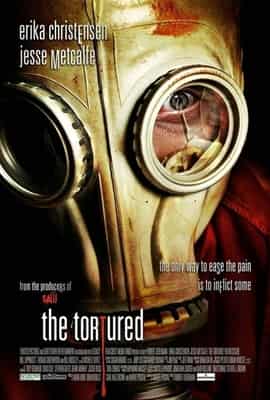 Plot – Spoilers:
A Canadian couple lose their young son to a serial-killing pedophile who tortures and murders him. The killer enters a plea bargain and gets off with 25 years and the possibility of early release. At this point, the parents lose their shit and decide to rent him a place in their personal hell.

The Tortured came out the same year as 7 Days, another Canadian film with pretty much the same premise. The Tortured though has a twist ending and is the less brutal of the two.

off topic but literally howd u change ur profile picture please

How do I set a DP like some users appear to have here?
You can set it at http://www.gravatar.com. You’ll need to sign up there. We have nothing to do with them, but this is a free, safe service that they offer. Please avoid using your real identity while signing up unless you’re ok with your name appearing on a site featuring effed up movies.
Once you’ve created a gravatar, please enter the same email ID (that you signed up with) in the comment field here and your DP will automatically appear here.

Admin, avatars are for losers / faggots (so many here!!!). Stop wasting your time and concentrate on uploading better quality fucked up movies!!! This is what you are here for and I have to say you letting me down lately.

No one cares, so stfu

Woman, you are annoying

LMAO stfu and go back to Disney+

Penetrartor3000
Reply to  A man

A man
Reply to  Penetrartor3000

go suck your own dick as usual

Do you require more assistance in setting up a gravatar? Is that what this is all about :))

Did you not listen to a word he said? The big baby is not happy about the effedup movies you have been uploading recently and wants good movies of the effedup nature. Sadly one cannot pry into his puny brain and so I guess he has to be more specific in taste.

well i am a dyke so youd be right :3 and if u dont like what the admins upload go 2 another site or go find movies urself lmao

Shut up Woman and go cook me a meal!!!

There’s a brief juncture where you have the ability to edit or retract your commentary, otherwise, it’s futile once you’ve posted.

Have updated the About section of this site to include this information. Pasting here…

******
How do I Edit or delete my comment?
Due to the variety of plugins used across the site and page caching, this has become a complex problem to solve. If you really need to edit your comment, we’ve provided an option that involves a little trickery and which might or might not work depending on your browser and whether you’re in Incognito mode. You can try it though and see if it works for you.
1. First, rate a comment that already exists on the page.
2. To the right of the Reply button below your comment is a grey box containing a wheel icon. Clicking or tapping that should open an ‘Edit’ option. This option will remain available for 15 minutes after you posted your comment. After performing Step 1, try and edit your comment and save it. It might get saved, else you’ll receive an error message.

Deleting your comment is simpler.
If for some reason, including accidentally posting a comment under your real identity, you want to have it removed:
Reply to your comment with a new comment requesting deletion. A simple “delete” should suffice. But make sure to use the same email while posting this request – that’s the only way we can know it’s you requesting this and not someone else.
******

Much appreciated Admin… please delete all my comments posted on this fantastic website.

I’ve been acting like a pathetic attention seeking loser with all the postings and ridiculous language… I deeply regret it.

I also want to apologise to the EUM audience for having to endure such a torment… I’m checking in a mental institution and won’t be posting for a long, long time.

Your delphic nescience is misanthropic and exiguous.
“I’m checking ‘into'”…
“Fuck me!!!”…
You wish 🙂

Your parodical masquerade is inconsonant and preposterously picayune. Your detriment is paramount, the exposition of your diligence deficiency infers impecunious destitution and detritus.
Continue dribbling limp dick and tuck in your arsehole, it’s repugnant.
Matti 🙂

I will dumb it down for you in layman’s terms, so you have the capacity (ability) to understand 🙂
You’re either a disgruntled (sulky) asinine (witless) adolescent (teenager), or an inarticulate (unintelligible) adult. Your impersonation of another person reflects your inability to acquire (attain) your own individuality and originality. Understandably, if you’re a teen, they’re barbarous (brutal) years and you’re projecting prognathous (noticeable) angst. Now, on the other hand, if you’re an adult, then I feel a parlous (extremely) dysphoric (sadness) inclination toward you.
Please find some integrity (identity) in your life instead of malingering (pretending) to be someone you’re not, using my name, for example, exposes your effluence (basically shit) and puerility (weakness). Take care of yourself;
Matti xx

Another thing, admittedly I’m not chagrined (ashamed) of having been privately institutionalised when I was possibly your age… My adolescence was parsimonious (unkind), I struggled with abusive people such as yourself. My fluent volubility (expression) and eloquent execution (words) will never metamorphose (change), nor shall I acquiesce (conform) to appease (serve) grotesque people such as yourself. I get it, trolling people is funny to you, you find it amusing to belittle (shit on) someone you don’t understand. Honestly, I smile sadly, but oftentimes I’m just insentient (numb).

Dude, you have waaaaay too much free time.

And thanks for sharing that you like to swallow “come” 🥹

Hey… pull up you pants, kid. Your dickhead is showing.

go to school and learn how to spell, hick

Oh look… a triggered little poo-butt who’s best retort is a sticky R key… Your shit is indeed weak, you little insignificant loser. Now go put on your fancy panties and gobble up Daddy’s dick like a good boy.

They make him wear the mask to keep him from sucking off the other inmates in their sleep. They call him Lecta the Trifecta on cell block D because he always knows which 3 guys are going to finish first, and in which order.

Bad acting spoils everything. If you have a script that has been shot thousands of times before, at least choose a better cast.

Nah man, the husband character a couple of times yeah, but the rest did a great job on acting, especialy Bill mosely aka otis from the devils rejects.

Bill Moseley did a good job on the acting, the mom was ok. The dad however is the biggest piece of shit beta cuck actor I’ve seen in a long time.

Hi, I have copies of movies to offer that I think would suit the site well. If you’re interested, email me. Thanks.

Thanks! I first discovered this site with Seven Days, and the similarity is interesting.

A truly tragic twist at the end.

Watched this movie when I was younger and I enjoyed it very much, it’s still just as good but I never understood the twist, is he the right man or not?

Mike the Tramp
Reply to  Coco

Seems like they got the wrong guy. My understanding is that the torture fucked with his mind and he got convinced that he was the perp. The real asshole was taken by the cops and the couple will soon hear from them. Now that WILL fuck with their heads lol

Spoiler: There were 2 people on the prison transport, while they thought it was just the child abductor. One of them was a guy going to prison for 18 months for tax evasion and fraud, which is the guy they got. The concussion he had from the wreck gave him amnesia. That coupled with the torture convinced him that he really was the child molester that he wasn’t. The child predator was running rampant in the wilderness the whole time (at which at one point he even peeks into the basement window of the house and sees the tax evading dingaling getting tortured) until the police catch him in the end.

Moral of the story: Pay your taxes

He is not the right man which almost ruins the whole movie, thankfully he knew better than to not let the parents suffer more for knowing he was the wrong man, so he pretended to be the right man before killing himself. But in a way it’s kinda unrealistic as the parents would know later anyway when they watched the news. So fuck this garbage, way to ruin a potential masterpiece.

Would’ve been one of the greatest movies, wasn’t for that crappy cliche ending. Pretty sure this movie was written by a psychopathic pedo.