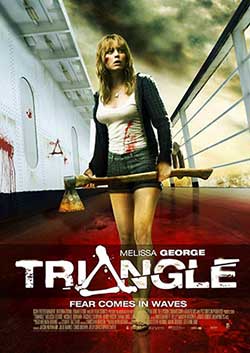 Plot – Spoilers:
Jess is a single mom and waitress at a diner with an autistic son. Greg who frequents the diner befriends her and invites her to go sailing with him and his friends. Jess, who’s been having a hard time dealing with the special needs of her son, looks forward to it as a break and heads to the harbour, but arrives there looking dazed and without her son. Greg’s other friends aren’t too impressed with her but there isn’t too much time for the claws to pop out because the group gets caught in an electrical storm with one of them going missing. A passing ship appears to be a saviour just when all hope is lost, until they board it and find it empty. And then things start to get weird as Jess who’s been having a feeling of deja vu all along, sees a copy of herself trying to kill all of them.

Plenty of time-loops are unraveled and if you can keep track of who’s who, it can be quite an entertaining and gratifying watch.

Favourite Scenes:
All the loop scenes are great but visually, the scene of multiple Sallys lying dead, is quite stunning.

Explanation:
A mother trying to save her son from death is the most obvious reason for Jess going back on the boat and hoping she can change the outcome each time. The problem with this thought is how come she doesn’t carry the memory of all that has happened and avoid the crash in some later loop. This leads to (and several have theorized) the conclusion that the Jess in shorts, is actually dead and doomed like Sisyphus to keep looping. So, are the others on the boat interacting with a ghost, or is it all Jess’ imagination.

Triangle like all time-travel loopy movies leaves a lot to conjecture, which is the way we like it I guess.

4/5 STARS – This is a tightly plotted, twisting slasher movie that plays with space and time in a way that will satisfy sci-fi fans as well. For al its plot twists, this film’s biggest shock comes in the deeply unsettling and emotional final scenes.

What the fuck did I just watch…?

Apparently I have to watch it again…

The later Jess on the boat was not credible. After seeing herself fight and lose, she persisted. After Sally died, just yell to the newbie Jess who threw shooter Jess off the boat to not let them board. Also, she could have easily saved Victor. Now I see why this was considered not as well done as Time Crimes.

Well acted but so so story line…Twilight Zone influenced, but can’t compare…

Almost bailed on this one about 30 minutes to 45 minutes in. Glad I didn’t. It’s super weird and good. Really liked it. I will watch again.

Oh yeah – Like when Downey and Sally got stabbed in room 237 – nice touch.

Worth the watch just for Melissa George, she has matured into a beauty since her days on ”Home and Away”. For those who dont know what that is, its a soapie from Australia thats been running since 1987.